Post-apocalyptic, doomsday cinema never looked and felt like so much fun, thanks to Michael Mahal’s latest independently written, produced and directed Attack of the Unknown. The crowdfunded campaign, currently surpassing its stretch goal of $40,000 on Indiegogo, brings together familiar sci-fi themes with an iconic 80’s cinematic treatment — a nostalgic project that is furthered by the film’s top billing, 21 Jump Street and A Night at the Roxbury star, Richard Grieco in the starring role. 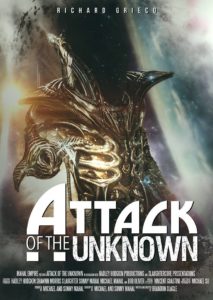 What sets Attack of the Unknown apart and makes it so appealing for its backers? Alongside the myriad leveled “perks”, themselves alluring and bold in reward points, it’s the fact that Mahal’s pic promises to be something like Quentin Tarantino’s take on the Spaghetti Western: there’s irony, satire and tongue-in-cheek humor hidden behind alien suits and SWAT team armor.

Slated to begin filming in 2019, Mahal’s production house is hoping to hit a new goal of $50,000, a $10,000 increase over the original stretch goal of $40,000. Clearly, backers of the project are also longtime fans of Mahal’s and the synopsis sounds promising enough to warrant production.

The story revolves around a curious question that has spawned countless conspiracy theories and PBS documentaries: What’s really behind the sudden disappearances of massive civilizations or cities in history? In Attack of the Unknown, a SWAT team, led by Richard Grieco’s character, is trapped inside a county detention center while transporting a vicious cartel boss while, on the outside, alien invasions are not just burning their civilization down, they’re actually tracking the SWAT team within.

The perk levels are commensurate with what backers might expect of an independent production. Here, passion and talent combine to make a host of generous offerings. $25 USD, for example, will earn a backer a digital copy of the movie, the script and a poster, set to be delivered in July 2019. This is the “Silver Star” level. At the “Dealer” level of $250, backers will be rewarded with a product placement deal that can include an actual product or a promotional inclusion such as a band song or a work of art in the movie credits.

And while several backers will enjoy the $1000 USD level of “High Roller”, offering a custom written speaking role on the production, it’s actually the $750 VIP reward that proves the most interesting. Backers can look forward to a two-hour “crash course” on crowdfunding from Michael Mahal, runner and developer of several successful campaigns netting $250,000 on Indiegogo.