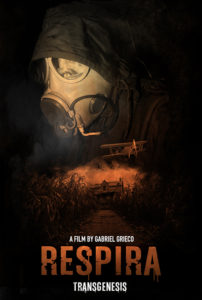 The film “Respira” (“Breathe”), directed by Gabriel Grieco was one of the 7 films selected to participate in the “Upcoming Fantastic Films” section at Marché du Film (CANNES Film Festival) this year.

Leonardo gets a job as a fumigator pilot in the soybean fields and moves with his familiy to the countryside. When he starts working, he discovers a dark secret that will put him and his family in danger.

Compendium of the Unmasked: The Hollow Raven – Indiegogo Pre-Launch