To survive and stay a step ahead of the competition during the Wild West years, entrepreneurs had to cheat. So it was without compunction that one group of prospectors raised spirits of the dead to pinpoint the most profitable ore-bearing veins up for grabs in Colorado’s gold rush. But during one incantation they overstepped an unwritten rule, conjuring a demon that refused to go away.

Over a century later, the demon incarnate has resurfaced, only to wander the mountains while trying to regain its memory — and a purpose. But time is running out. The awakening has created a rift in the spiritual world, and to prevent a cataclysm, powerful magi converge on Colorado. But the one thing greater than the sorcerers’ fear of one of Hell’s mightiest roaming free is their hatred for one another, though little do they realize that the fiercest obstacle in their way is a sociopath high school teacher and Lorissa, a tough-minded woman who will do whatever necessary to protect her home and her family.

“I must admit I don’t know where to start from. Well yes, I will start saying: THIS BOOK IS GOLD.”

“Beware the Demons Betrayed is intelligently written and there is a great deal of erudite information incorporated into the novel. This is done in a subtle, artistic way that enhances rather than detracts from the story. The central plot is a slow burner that ends in an explosive and bloody denouement that I found captivating. In the interesting and skillfully interwoven background stories, in the depth and interest of the characters, in the palpably building suspense, the author has created a satisfying and engrossing story that I highly recommend to fans of literary supernatural horror. I’m looking forward to the promised sequels.”

“Perkins is a powerful writer, and for all this writing of people using bewitching words, he appears to have an entrancing effect as well. I wholeheartedly recommend this book.”

“Spanning centuries of time and thousands of miles, Beware the Demons Betrayed unrelentingly entices — then shackles — the reader to the macabre world of sorcery, vengeance and depravity. On one magnificently tortured hand, the reader will want to read it nonstop; on the other, the reader begs that the story never end so the thrill may be extended.”

“I am a sucker for demonic/possession/supernatural tales, and this one pulled me in right off the bat. There were moments that reminded me of Prophecy films with Christopher Walken (well, at least the first two films). With so many zombie novels around (and don’t get me wrong, zombie is one of my favorite genres), this great book was a breath of fresh air. With deep and rich characters, the story doesn’t let up one bit and even with at times long expositions and narratives, it still manages to keep ones attention. Truly recommend this one to everyone that is looking for a good demonic horror tale.”

And then try something a little different with…

In 1998, Russia crawls toward financial meltdown, and in its western exclave, for seven centuries German territory, a cyclone of violence is about to erupt.

Anatoly Zavrazhin, tycoon of the isolated Kaliningrad region, wants to take over the lucrative amber industry. To do this, he must cut a deal with the governor, whose hatred of Moscow has whipped up fantasies of autonomy, and outmaneuver Nikolai Nadezhdin, a decorated cop who has caught on to the oligarch’s weapons-smuggling operation with the ranking army commander.

All these elite players, however, are unaware that a chain of horrifying events among the rank-and-file is unfolding with destructive ferocity. A crew of crooked cops runs a deadly real estate fraud, a gang of outlaws kills people for their cars, and an amateur archeologist believes he had found a phenomenal WWII treasure hidden by the Nazis.

And among all walks the philosopher — anonymous, appalled, inspired, and determined to find a cure to Russia’s moral collapse.

When their paths collide, the region will turn into a fiery cauldron no one can contain. 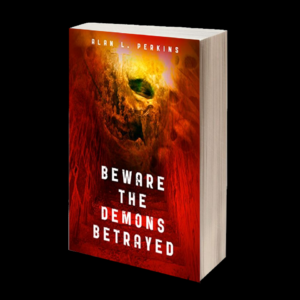 Alan is an editor-reporter based in Eastern Europe with a focus on energy markets. Creative writing is the best escape from the shackles of journalism and the madness of reality.

“The Philosopher’s Last Rhapsody” is a criminal drama set in Russia’s isolated Kaliningrad region that explores the rise of gangs in the 1990s and Prussian philosophy.

“Beware the Demons Betrayed” is the first of a potentially four-part supernatural thriller series. The second installment, “While the Witch Whispered a Prayer,” has a tentative end-2019 release.