-PH: How did you become a filmmaker, sir?

-Jimmy: Great question! Like most filmmakers my love for cinema started at a very young age. I always loved telling stories so when I was 17, it really started bubbling in me to start telling my own stories through film. I also developed a passion for acting so I began taking acting and screenwriting classes. A L.A. based production company came to Colorado to film a movie starring Alan Thicke and Lindsay Wagner. I was an extra in this film and I learned firsthand what hurry up and wait meant lol.

During all this waiting around I was absorbing the makings of a movie like a sponge and I knew then and there that I wanted to also make movies rather than just writing and acting in them. So I started helping behind the camera on projects that I would act in and gained a lot of experience until I felt ready to start my own production company Heart and Fire Productions in 2007 and the rest as they say is history.

-PH: And have you fused your interests growing up into the stories you write?

-Jimmy: Most definitely, especially when it comes to horror. I grew up on all the great horror films so that is a big interest to me when writing films and the impact those films had on me. However, I can easily tap into my personal life experiences and write some really good drama films! Which I like do as well with Heart and Fire Productions.

-PH: If you could name two films that most resemble this film, what would they be?

-Jimmy: Creepshow and Tales from the Crypt, the 1972 Amicus film. 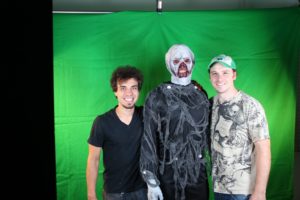 -PH: Being an independent film, I imagine you ended up wearing more hats than originally intended. Can you talk about all the things you did on the movie?

-Jimmy: Alrighty then! Let me take a deep Ace Ventura esque inhale lol. I was the writer, director, producer, cinematographer and editor. I also did a lot of the finishing touches in post to the audio sweetening and some finishing touches to the visual effects. And exhale. Whew!

-PH: How did you get all these names onboard? Who was the hardest?

-Jimmy: It all started with Lynn Lowry back in 2015. I was originally trying to get a horror, action western off the ground called Spirit Reckoning and created a Facebook page for it. Lynn and I had been facebook friends and she got my page invite and sent me a message inquiring if I was casting yet for it. As a little time went by I knew it was not realistic to shoot Spirit Reckoning at that time so I shifted to Terror Tales and got back in touch with Lynn to see if she would like to be part of it.

From there my wheels got turning that it would be cool to have an iconic horror actor or two or three in each segment making it somewhat of an Expendables of horror style film. I started thinking about actors whose horror films I grew up watching and began contacting them directly whenever possible or having to go through their manager. A few of the actors where recommended to me from some of the other horror actors I had cast so that was nice to be put in touch with others. For example Jonathan Tiersten and Yan Birch both put me in touch with Felissa Rose which was fantastic! Everyone was incredibly excited about the project and to be part of it so luckily none of them were particularly hard to get on board.

-PH: Whose career would you like to emulate, if it were possible?
Do I sense you’re a fan of George A.Romero?

-Jimmy: Your spidey senses are on point, I’m a huge George Romero fan and also of Lucio Fulci. In fact, I have a fun little nod to these two horror masters. The News broadcast in Terror Tales is LFGR News… the initials of Lucio Fulci and George Romero, two of my favorite horror directors. I’m kind of side stepping your question now because there are several horror director’s who I would like to emulate if it were possible. I’d have to say if I have to pick one then it would be George Romero. I really dig how he incorporates social commentary into his films without ever being preachy and using the horror genre to get that message across. It’s fucking brilliant and sets his films apart from other horror films. Plus he was an incredibly laid back kind of guy, I’m very similar like that. RIP George.

-PH: Tell us when the film hits?

-Jimmy: … Bam! Terror Tales hits VOD on January 8th, 2019 and DVD (loaded with special features) on February 5th, 2019 just in time for Valentine’s Day to make for the perfect gift for the horror junkie in your life. And if you’re twisted enough, you can package it with a human heart… okay that may be going too far for Vday.