A couple of weeks ago we started promoting ‘Maria The Wanted and The Legacy of the Keepers’ by author V. Castro. After setting up the promotion, we wanted to find out more about Maria, and V. Castro. Now hear from the author herself, as she shares some more details about the book, her other stories, and what she has coming up…

-PH: Why horror? What sparked your interest in horror?

-V. Castro: I was about nine when I first watched The Exorcist. It scared me to death, but I was hooked! As a Mexican American woman, my culture has so many superstitions and tales it’s difficult to not be drawn into the world of the supernatural. I don’t remember a time I didn’t acknowledge there was this other shadow world that may or may not be out there. I always say horror is more of a state of mind. It’s a curiosity into the darker side of life.

-PH: At what point did you know you wanted to write horror? Did you consider writing in another genre first?

-V. Castro: I began writing because I really needed and outlet in my life. I was not in a good place emotionally. I knew I always wanted to write, but nothing was cohesive until this. Even as a child after watching horror films I would try to write something scary. Nothing came to mind. I was so frustrated! I wanted to be Alvin Schwartz.

Saying that, I love a genre mash-up, so everything I write has a bit of everything. Why put limitations on the imagination? I hate rules, boxes, labels, and anything that says things should be this or that way. Who died and made anyone an authority. We are all worm food! 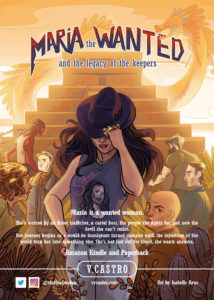 -PH: So now lets talk about the horror you have written, ‘Maria The Wanted and The Legacy of the Keepers‘ What’s it about?

-V. Castro: Maria is a normal woman working in a factory in Juarez, Mexico during the night shift. Her dream is to cross the border for a better life and education. She and her co-workers are attacked by vampires; however, one spares her. She is then left to figure out who/what she is in this world. She transforms from a scared unsure human to a woman with brass knuckles and justice in her heart. Then enters Lucifer….

Imagine if Blade was Mexican, female and fighting for those with nowhere else to turn for help.

-PH: What can you tell us about Maria, and why readers will be interested in her story?

-V. Castro: For one, Juarez is an extremely dangerous place. Women and girls go missing without a trace all the time. Is that not Horror? Cartels run streets and dump bodies in broad daylight. Sometimes you don’t have to look very far to find real horror.

People can relate to Maria because we all have dreams, heartache and things that keep us up at night. Everyone has moments where they wish they had the power to change something out of their control, what if you had the opportunity?

-PH: What and/or who is your greatest influence(s) in creating Maria?

-V. Castro: I began writing book two in the series first. Maria was only a small memory, but her persona was so powerful in my mind. There is a song by Santana, Maria Maria, and that just sparked the story.

-PH: What can you tell us about ‘the Keepers?’

-V. Castro: The Keepers are an organization not unlike the XMen, but vampires. They come from all over the world from different times in history. The Keepers are the unseen force behind humanity. Mordecai is their leader, for now.

-PH: This is the first book in the series. Without spoilers, is there anything you can tell us about what’s next for Maria, or when the next book will be arriving?

-V. Castro: The next book starts with my version of the vampire origin story. There is also backstory of other characters, including Lucifer. Then pick up on present day.

It will be released when I’m finished. 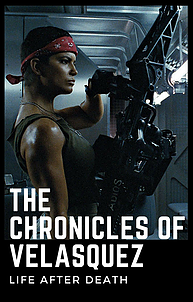 -PH: That isn’t the only thing your writing. What is ‘The Chronicles of Velasquez?’

-V. Castro: I LOVE the Alien franchise. When I was a small girl Vasquez in Aliens was always a favourite, but she died! I hated that! After watching Alien Covenant, I thought we might need some old school magic. Vasquez was reborn. For legal reasons, I changed everything, but her spirit is the same. It’s so much fun to write. I’m accessible via my website and social media, so if people want more there will be more.

-PH: A couple of chapters are on your website to read for free. Is it going to continue that way, or will it become a larger book one day?

-V. Castro: I would love for the Chronicles of Velasquez to be a book you could purchase, but it’s fan fiction so I’m not sure about the whole legal aspect of it. If people enjoy it and want more, I will totally give them more of her.

-PH: Both your stories feature strong women. Why is important for you to feature ‘badass’ women?

-V. Castro: It’s important because a lot of genres are dominated by white males. No hate on white men! Some of my favourite writers and musicians are white males, however, I think females can give a unique voice and perspective when it comes to storytelling. And badass women are sexy. Strength is sexy.

-PH: Here’s your chance to promote anything we haven’t talk about. Let us know something more about either of your stories, your website, upcoming stories, or anything else you would like to mention.

-V. Castro: Maria The Wanted and the Legacy of The Keepers! Give it a go!

In late January/February I’m releasing my first novella series of vampire erotica. It’s all blood and sex. Book two in the series in nearly finished and it’s even more bloody!

We would like to thank V. Castro for taking the time to answer our questions. Hopefully this gave you a little more background on ‘Maria the Wanted and the Legacy of the Keepers,‘ and what’s in store from author V. Castro. Again her book is available on Amazon, and make sure you follow her on the social media links above for her upcoming stories!