Filmmaker Brandon Slagle was raised on a steady diet of creature-features. No surprise then to discover he’s actually done one. We speak to the talented writer-director about “Crossbreed,” available on demand in February.

-PH: Congrats on the movie. I take it you’re a fan of the old school horror and sci-fi films of the ‘80s!?

-Brandon: Thank you and YES – that’s what I grew up on. I have fond memories from the 80’s running inside from the playground because the other kids said “ALIENS” was on TV. That, the original ALIEN, PREDATOR, ROBOCOP – and then smaller fare from that era and the 90’s like “I COME IN PEACE”, “SPLIT SECOND”, and CANNON FILMS have to take some credit for raising me – for better or worse.

-PH: Is it exiting or is it daunting to know audiences are about to feast their eyes on it?

-Brandon: I’m busy finishing the one we shot since, and about to start shooting another, so I really haven’t had much time to think about it! I’d say exciting, if I had to choose. I try not to get nervous or overthink things upon release.

-PH: Had many reviews yet?

-Brandon: Just a handful have started trickling in. I’m a realist so I don’t expect EVERYONE to jump on the nostalgia bandwagon with it, despite the marketing angle being sort of in vogue right now, but the people who “get it” seem to really “get it”.

That being said, I’m confused why someone said that you can’t tell the principal actors apart considering one of them is a bald African-American man with green eyes and another looks like Billy Idol?

-PH: Did you test it for an audience after completion?

-Brandon: On the downlow, we had someone who worked in marketing from Netflix watch it and give us extensive notes. I cannot divulge his identity because Netflix, I’d assume, has spies everywhere.

-PH: Anything you added in before or after?

-Brandon: We ended up cutting about 8 additional minutes out of it, in addition to the already 20+ minutes we’d cut during post-production. About 10 minutes of that will be on the Blu-ray release as a bonus feature.

We totally agreed with his comments, plus had just wrapped production on our follow-up “The Dawn”, so were able to look at it with fresh eyes. We definitely agreed with everything he said, and since he’s in marketing, it was valuable in determining what really mattered with the story and hooks. This stage is always invaluable. Even if a scene is great on its own, how does it help the story as a whole accomplish its goals? 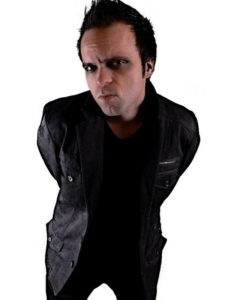 -PH: What do you believe are its strengths?

-PH: It’s an entertaining movie, most definitely, but do you think there’s also some messages in there?

-Brandon: This is sort of a double-sided coin. From its conception it was really meant to just be a fun watch. I want people to get rowdy with it. That being said, when we cast Vivica A. Fox as the President, it took an a whole new angle. This ended up being the first time an African-American woman was cast as the United States President in a feature film, so I hope that people are able to relate to that and see it as a beacon of hope, despite being presented in what’s essentially what would have been a Chuck Norris movie if it was shot in 1986.

-PH: What’s one thing about independent filmmaking that you think audiences aren’t aware of?

-Brandon: As much as you can try to explain it, it’s hard for anyone to really understand how difficult producing a feature film, regardless of it being independent or studio backed, is. It’s a whole new ballgame now because streaming sites and piracy have really widened the gap in budgets.

In the past you had your huge blockbusters that cost over 100 million, mid-range films that were 30-50 million, and everything 5 million and under. Now it’s (mostly) blockbusters and 5 million and under. It’s gotten increasingly difficult to greenlight or find financing for anything that’s not a known IP. Outside of Blumhouse, most smaller films are pre-sold on cast (not story) and the budgets keep getting lower and lower, so cast works more often, which also drives down their value in the marketplace because so many have so many films being released sometimes multiple times a month.

Beyond that, because of budgets, many of us are forced to compress our shooting schedules to the point of near insanity. In the past, even what was considered a “small” film would shoot for an entire month. Now we’re lucky if we get three weeks. I know of some films starring action guys who shot in TEN DAYS (I don’t want to divulge them, but these are films Sony has released!).

It’s incredible gruelling, and few people realize that even with money to spare, few people are cut out for this in the long run. It takes more out of you than you realize, at least until you try it.

-PH: If the movie was playing as one-half of a double feature at a Drive-in theatre what would be the perfect support feature?

-Brandon: Probably The Guyver films starring Mark Hamill. That or the last movie I acted in, Daylight’s End from my friends Will Kaufman and Chad Law.

-PH: Danny Trejo would be perfect in a movie like this – lets make that happen for a sequel!

-Brandon: Don’t mention sequel, Daniel Baldwin hears you now! Actually Daniel wants us to push this as a series proof of concept, and we’re adapting a script I wrote for Syfy a few years ago that didn’t reach production as a sequel (which works because we pulled a few elements from it for Crossbreed, such as the alien species).

Interview with the Author of ‘Planet Dead: Bloodthirsty’ Sylvester Barzey