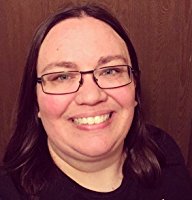 -April: I’ve loved horror since the age of 5. That’s when I was first introduced to the Universal Classic Monsters. My favorites were (and still are) The Wolf Man, Dracula, and The Phantom of the Opera.

-April: I started writing horror fiction during childhood and always dreamed of publishing my own books. I first broke into the horror industry with my dark art photography, though, which was exhibited and published internationally. It was also featured in a few Women in Horror Month articles back in 2012.

-April: When I was younger, there were very few female horror authors who had made it big. From reading Fangoria obsessively during childhood, I knew that the industry was known for being “a boy’s club.” Powerful final girls in cinema helped change that focus, and I love seeing so many female names on book covers now. The entire concept of Women in Horror is very meaningful to me because it celebrates how far we’ve come, along with how much further we can go. 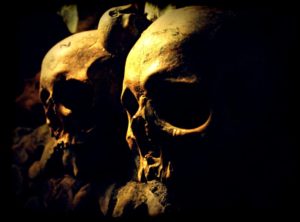 -April: Heather Langenkamp. Not only did she perfectly embody the ultimate final girl but she’s also proven herself to be a strong, compassionate woman who actually listens to her fans. She’s heard countless stories (including mine) about how important Nancy has been in the lives of those who were bullied or disenfranchised in other ways, and she takes this responsibility seriously. The world would be a much better place if we were all a little more like Heather/Nancy.

-April: We’ve risen far beyond being used as tools to titillate audiences. Now, women in horror are kicking butt in every possible aspect of the genre, ranging from filmmakers to video game artists. There are definitely still challenges, but it’s good to hear that prominent genre companies are more committed than ever to finding qualified women to work with.

-April: I believe that we’ll continue to build a strong presence in the genre, and we’ll also keep breaking the mold of what horror is “supposed” to be. The reality is that every person has their own interpretation of what horror means, and I love seeing creators of all genders explore the endless possibilities. Hopefully, we’ll end up reaching a level of equality within the genre that will render Women in Horror Month unnecessary.

-April: I’d love to direct a horror movie. The set of each of my dark art photograph series was run more like a movie set than a photoshoot, and I’d love to take that creativity and harness it into an actual film project.

-April: Nancy Thompson is my favorite final girl, but I also have to give a big nod toward Maddie from Hush because Kate Siegal absolutely crushed that role. There are several female villains who really stand out for me, including Marie from High Tension, Annie Wilkes from Misery, and Rose from Get Out.

-April: My Gothic horror novel, The Haunting of Cabin Green, was named one of the ‘Best Horror Books of 2018’ by PopSugar, Inquisitr, Ranker, and BoredPanda. Up next is Corvo Hollows, which is a psychological thriller about a woman who becomes convinced her neighbors are serial killers. The beginning of the book is based on a terrifying incident that really happened to one of my closest friends.

We would like to thank April A. Taylor for taking the time to answer our questions, but more importantly for her contribution to horror!

One thought on “Women in Horror Month Interview with Author/Photographer April A. Taylor”