-Alyce: I’ve been a horror fan as long as I can remember. I’ve always been trying to scare myself, LOL. The very first book I bought for myself, with my own allowance money, was The Demon of Detroit & Other Tales of Terror. I’m pretty sure that was the title. It came from the Scholastic catalogue they used to hand out at school when I was a kid. Do they still do that? I hope so. I still have a whole bunch of books I bought that way. Anyway, here I am, 54 years old, still scouring the internet, the bookstores, library sales, etc for great horror reads. And trying to find movies that will actually scare me, ha.

-Alyce: I’ve always wanted to. But I always thought I didn’t have the chops, to be honest. I’ve written gay romance since 2004 (published as Ally Blue since 2005) and I had an obvious talent for that, but I was afraid to try straight-up horror. It’s my first love, and I didn’t want to mess it up. Then I did a short erotic horror story for an anthology (no longer available, sadly) and it was super fun, and I thought my story turned out great. So I thought, why not write something longer? So I wrote my first horror novel, DOWN. It was published in 2015 and is still available. It’s a terrific book, and it’s my favorite thing I’ve ever written. It was a different animal than writing romance, but I absolutely loved every step of the process. It’s an Ally Blue book, but that book is the reason I created Alyce Black, really. Because it made me want to write more horror (and sci-fi, and other speculative fiction), and I wanted to separate that from my romance fiction because I knew that my horror fiction wasn’t going to have Happily Ever After endings. Sometimes, maybe, but not always. Manage expectations, right?

-Alyce: Too many people still believe that either women don’t create horror, or don’t create good horror. For me, Women in Horror Month means showing this belief for the lie it is. It means shining a light on all the gorgeous woman-created horror out there and the women who make it.

-Alyce: I don’t know if I can say role model, exactly. We’re all so different, it’s difficult to be like or work like any one person, and you certainly don’t want to write like any particular person. A writer needs her own voice, right? But ever since I read THE CIPHER by Kathe Koja, I’ve wished I had her gift for creating a gray, gritty, desperate atmosphere. The way she puts words together is just astounding. Anyone who hasn’t read that book needs to read it yesterday!

-Alyce: It seems we’re allowed to have an expanded presence now. Some people, at least, now recognize that women can and do create excellent horror. And we’re no longer relegated to the role of slutty-girl-who-gets-killed, or final-virgin-girl, or damsel-in-distress, or refrigerator girls. I think we still have a ways to go before those roles, particularly in film and TV, regularly and reliably pass the Bechdel test.

-Alyce: I hope the future sees us expanding our roles in horror until our space on actual and virtual shelves (for every type of product) equals that of men, and nobody can imagine not seeing women as equal creators.

-Alyce: I’d love to create horror-themed paintings. I have zero talent for visual artwork, but man, I wish I did. That would be SO cool 😀

-Alyce: Oh my favorite final girl is always and forever Ripley. She’s my HERO and Alien is still one of the best horror movies ever made.
Female villain, hm. That’s tougher, but right now I’m going to say Ginger from Ginger Snaps. She’s a wonderful example of a three dimensional villain. Although maybe “villain” is kind of simplistic word for her character. Still, that’s my answer today. Ask me tomorrow and it might be different 🙂 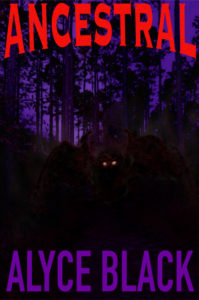 -Alyce: Right now, I’m working on a female Wendigo horror novel that spans about 300 years. It all started with my daughter wondering what would’ve happened if Baby Claus got caught and raised by the Winter Warlock instead of making it over the Mountain of the Whispering Winds to the Kringles. So, yeah, Evil Santa somehow because a family of female Wendigo, and here’s me following their story for a few centuries. Funny thing, life. Hopefully somebody will want to publish it because I’m not crazy about self publishing. Marketing is not one of my talents.

Speaking of which, my self-published Southern Gothic-flavored horror novel ANCESTRAL is available for $2.99 throughout the month of February in honor of Women in Horror Month. This is a really terrific book, y’all, read it!

When Roland discovers the monstrous secret at the root of his family tree, he must make a choice: embrace his fate, and lose the man he loves. Or fight back, and lose himself.

Roland Boone arrives in Southern Alabama determined to revive the commercial pecan orchard he inherited from the grandfather he never knew, and to learn about the family whose existence he only recently discovered. But Night Orchards presents him with a puzzle both intriguing and unnerving. It isn’t simply the odd behavior of the neighboring farmers, or the orchard’s unnatural silence. It’s the shadows at the edge of his vision. The strange shapes in the forest. The bizarre, vivid dreams that bring back memories of a childhood spent locked up and medicated. Dreams that make him fear for his hard-won sanity.

The one solid element in Roland’s shifting new world is the estate’s enigmatic caretaker, Gilbert Vargas. In spite of his reserve, Gilbert offers both support and a sympathetic ear. And the heat in his secretive glances gives Roland hope that his attraction to the caretaker is reciprocated. What Roland wants most, however, is information about the Night family—his birth parents, his grandparents, his ancestors. But that’s something Gilbert never talks about.

Until a gruesome murder forces the family’s long-buried secrets into the light. When Roland discovers the unexpected power and joy of his ancestral heritage, he finds himself faced with an impossible choice: become what he was born to be, and lose the man he’s come to love. Or help end a centuries-old horror, and lose the only true belonging he’s ever known.

We would like to thank Alyce Black for taking the time to answer our questions, but more importantly for her contribution to horror!