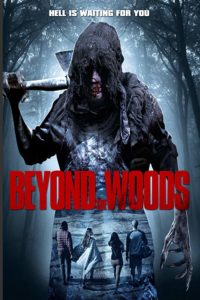 ‘Beyond The Woods’ has been nominated for ‘Best Thriller’ at the National Film Awards in London. It’s the most prestigious award that the film has been nominated for to date. 1.9 million people in the U.K voted for this list of nominees where ‘Beyond The Woods’ is 1 of 8 nominated films with big budget Hollywood & Netflix films. The winner will also be decided by public vote. The film is currently out on DVD in all HMV & Walmart stores and Video On Demand with Sky, Amazon Prime, iTunes & YouTube in Ireland, the U.K, U.S & Canada. It previously won Best Feature awards at film festivals in Montreal & London before distribution. ‘Beyond The Woods’ was also recommend in Empire magazine by legendary film critic Kim Newman.

Seven friends meet up in the Irish countryside for a secluded weekend getaway but unfortunately for them a fiery sinkhole has opened up in the mountains nearby. It’s burning hot, spewing out sulphur and casting a hellish stench over the local area. Determined to make the most of the weekend, the group decide not to let the noxious atmosphere get to them…but it’s getting worse. Soon the troubling hallucinations begin as an ancient evil starts to take hold. What malevolent force has crawled from the sinkhole and will any of them survive the weekend?

More information can be found at:

Beyond The Woods Wikipedia:
https://en.wikipedia.org/wiki/Beyond_the_Woods