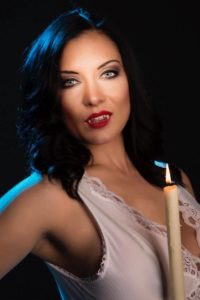 -Dani: I’ve always loved horror, when I was little, even the cartoons I watched had horror elements, Scooby Doo, Count Duckula etc.

The first real horror film I watched though was IT and I was 8, it terrified mt but I’ve been hooked on horror ever since.

-Dani: Well I’d always loved horror but after drama school, I didn’t purposely set out to do just horror, it just kind of panned out that way, the horror community are amazing here and after doing a couple of horrors, a lot of work I did for a while I was booked for through word of mouth or was repeatedly booked by the same genre directors and now I wouldn’t have it any other way. I love the genre, the people who work within in the genre and I’m making the kinds of films that I love.

-Dani: It’s great because it gives the women in horror the recognition they deserve, girl power!

-Dani: There’s lots, Jennifer Love Hewitt, Christina Ricci and Sarah Michelle Gellar were all favourites of mine growing up because it was a lot of their films that I watched then through the late 90’s and early 00’s but also legends like Martine Beswicke, Kate O’Mara and Ingrid Pitt

-Dani: There are a lot more stronger roles for women, women don’t always have to play the damsel in distress anymore but there are also so many more women now working not just in front of the camera but also behind, female producers, directors and writers all contributing to horror.

-Dani: I think the only way is up, women have the power now to run with what they want so I think we’ll see a lot more horror made by women.

-Dani: I’m been a vampire, a zombie, a werewolf but I’m yet to play a witch so I’d like to do something witchy, I’d also like to play a really ugly Buffy style demon with prosthetics, that would be cook.

-Dani: Favourite final girl, Jennifer Love Hewitt as Juilie James in I Know What You Did Last Summer or Neve Campbell as Sidney Prescott in Scream and villain, Fairuza Balk as Nancy in The Craft.

-Dani: I have Pumpkins and Party Of Valice both due for release I think some time this year, both films by Maria Lee Metheringham, who is kicking ass as a horror actress and director right now, she’s definitely somebody who inspires me to get off my butt!

Last year I shot for Harvest Of The Dead – Halloween Night, Clownface and Devil In The Woods which are in post production so hopefully they’ll be ready for festivals or release at some point this year too.

Coming up I think later this year, I have Magic Is Murder that Maria is directing and Paddle, Bite, Scream that her husband Will is directing, they really are a force to be reckoned with and also I Scream On The Beach which is being co directed by Alexander Churchyard and Michael Holliday

As well as all that, I also have a new paranormal investigation series being filmed called ‘What’s Out There?’ which is exciting. It will be fun yet factual as opposed to taking itself too seriously, there’s a great dynamic between me and the other guys, David V G Davies and Anthony Hughes and we’ll be investigating all aspects of the paranormal mixed with historical accounts and eyewitness interviews as well as the usual ghost hunting and it’s been great to turn by hand back to doing a bit of presenting and I do love to explore.

We would like to thank Dani Thompson for taking the time to answer our questions, but more importantly for her contribution to horror!

Official Poster and Trailer for “Profile”