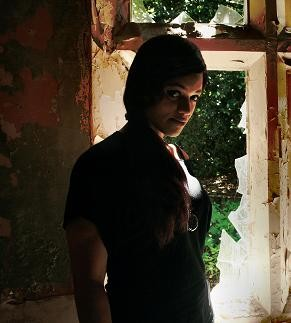 -Catherine: I have been a horror fan as long as I can remember. I used to sit and watch horror films with my dad, and I think it just kind of stuck. As I got older I started to explore different styles of horror film; psychological, gore, comedy, cult, undergrounds etc.

I have always been an avid horror reader also. R.L Stein was my childhood horror author- I was obsessed! As an adult it just has to be the legendary Stephen King.

I think there was also a musical influence. I’m very much into darker music; Marilyn Manson, Wednesday 13, Murderdolls, Slipknot, Rammstein etc. Whilst it is a very different medium, music and its associated imagery was hugely thought provoking and influential for me too.

-Catherine: I would say there was a natural progression from watching and reading horror, to writing your own. I think the sheer volume of ideas and inspiration from such a wide spectrum of different mediums meant it was pretty inevitable.

I think it is a very addictive genre as well. I have started to become more interested in getting involved in the horror film scene too. I think the more that you are involved in horror, the more inclusive you see that it is, especially more recently. I think you also realise that it is such a diverse genre to get involved in, its great!

-Catherine: I think it’s so important that women’ contribution to the horror genre is celebrated. It is a genre where traditionally at least, women tended to be typecast into certain roles. The half naked blonde tripping over in the woods springs to mind.

“Women in Horror” month is an opportunity to express how much women actually contribute to horror; as directors, lead characters, authors, producers etc. One of the biggest things for me is that this gives us the opportunity to show that women have more to offer in this sector than just bringing the sexual element to the table. We are so, so much more than that.

-Catherine: I’d very much like to try my hand at acting in a horror. Given the number of horrors I have seen, read about and written, it would be great to get involved on a practical level and actually play out the scenes myself.

-Catherine: There are so many female characters I think are fantastic in film. Jamie Lee Curtis is an obvious one. However, two who really spring to mind from 2018 are Milly Shapiro and Toni Collette in Hereditary. I thought both of their performances were fantastic.

In terms of female villains, I guess Carrie, or Samara from the Ring, though I dont feel either of those really count as horror movie villains given their circumstances! I think I will go for Olwen Kelly (the corpse) in The Autopsy of Jane Doe. Another great film, by the way.

My current two pieces of work are:

Through the overgrown field, over broken down fence,
Is the path to the true place where horrors commence.
To the place of the fallen, where the forgotten dwell,
Just take a sharp left at the old haunted well.
Follow the arm of the gnarled twisted tree,
And you’ll find Sinister Town, an unfortunate melee.
There are tales from this place that will make your ears bleed.
Refuse to turn back, and on you they will feed.

The Children of Manson

Would you allow an aggressive disease to spread? Would you watch with indifference as it devastated its host? I have a choice. And I, along with my Family, choose to act. Now you may choose. Join us… or die

Please feel free to check out my work at: www.thecathystories.com

We would like to thank Catherine Bell for taking the time to answer our questions, but more importantly for her contribution to horror!