-PH;When did you first become a horror fan?

-Cinsearae: It may or may not have happened by accident. I had watched “The Exorcist” on TV when I was in grade school, I may have been 8 or 9. Had to sleep with a light on for a month! Then I saw Dracula (1979, starring Frank Langella). Not really scary per se, but seeing Van Helsing’s dead daughter try to attack him really unnerved me. I was also drawn to Dracula, not wanting him to get killed. I had sympathy for him, as he didn’t seem ‘evil’ to me, just lonely, and I could really relate to that as a kid. Anytime a scary movie came on TV, I was equally terrified yet drawn to watch it. Then Tales From the Dark Side, Night Gallery, The Twilight Zone, The Outer Limits, Monsters, and Tales From the Crypt, became staples in my TV-watching routine. Conventional stuff was just too boring to me.

-Cinsearae: I truly believe it was innate. For some reason, I’ve always been drawn to the darker side of things. I had a natural love for Halloween–as a kid, dressing up and getting candy was all well and good (and I never liked dressing up as something pretty or cute!), but I always felt there was more to this time of year. Something eerie and mystical that I couldn’t quite put my finger on… As I got older, that ‘pull’ towards creepy, dark things and horror never left me. There’s always something in my photography, drawings or art that speaks of something Gothic, morbid, or scary.

Around 2009 I began creating creepy dolls and gothic/steampunk inspired jewelry and accessories, selling them online. But it wasn’t until 2012 that I decided to take my creations out on the road and began vending at conventions and special events. I started at The National Halloween and Haunters Convention, where I received the Fright Times Award for Best Horror Collectible. That showed me I had what it took to keep doing what I loved and share my creepy creations with those who shared a love for the genre.

-Cinsearae: I’m so glad it was started so everyone can recognize that horror isn’t a completely male-dominated niche (but I also wish it wasn’t during the shortest month of the year!). Women in Horror should be recognized all year round! 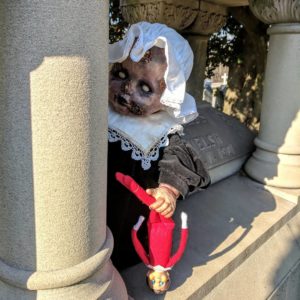 -Cinsearae: Vee Neill for her years of expertise in makeup FX!! She is a perfect example of someone who had to overcome a bit of male arrogance in the industry and is now who she is today.

-Cinsearae: I’m so happy to see female characters taking on a more stronger role in movies today rather than the typical victim/damsel in distress. It’s too cliche! I also like seeing women in predator mode rather than prey.

-Cinsearae: Nothing but the best—I’m seeing women in the horror film industry growing, especially as directors in both Hollywood and Indie movies. We need more of that! 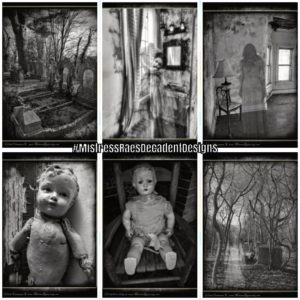 -Cinsearae: Special FX makeup! I’ve been in love with that idea for years. That would be my dream job.

-Cinsearae: For my final girl, it would have to be Jamie Lee Curtis as Laurie Strode from the Halloween series. As for my female villain, it would be Fairuza Balk as Nancy Downs from The Craft. I found her relatable, although she wound up a victim of circumstance. 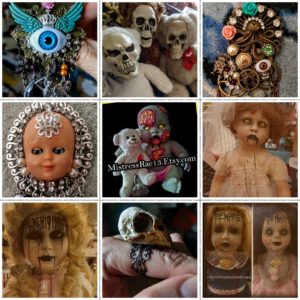 -Cinsearae: I’m constantly working on new creepy dolls and babies. Everyone can always check them out on my Instagram page http://www.instagram.com/cinsearae and feel free to follow me or send me a message if they’d like to adopt one! They can also find out my upcoming events for the year.

We would like to thank Cinsearae S. Reiniger for taking the time to answer our questions, but more importantly for her contribution to horror!

“Within the Darkness” Now Out on Digital Platforms