-Ravennight: I was very young. My mother and grandmother were big horror fans. I really took to the short story horror shows. Night gallery, Tales from the darkside, tales from the crypt, Hitchcock, Twilight zone etc.

-Ravennight: I first felt that roller coaster thrill effect, after I saw the original poltergeist. Especially that bathroom scene! I knew I wanted to scare people. I told my mother and she gave me this awesome cast iron typewriter and so it began.

-Ravennight: Recognition and honor. Like we all won an award. Like someone stopped and said ” I know you are working hard to give people nightmares, I see you ladies.” It’s also a great time to recognize your sinister sisters are. Whether you are seasoned or fresh off the bus. Most of the greatest women I have met, work within the horror genre. Not just their talent, but with personalities that also make them shine.

-Ravennight: This is not an easy one to answer. It’s like trying to break it down to a favorite song or movie. I will say that I have a lot of admiration for the soska sisters. With no hellavator pun intended, I personally feel they took it to the next level. 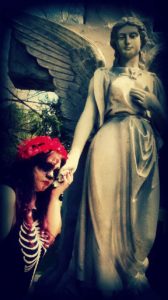 -Ravennight: There has always been great women in horror, As there always will be. The archaic belief that we can’t scare the hell out of you too, well, think that’s been proven already.

-Ravennight: Boundless opportunities. The only restrictions I for see, would only what we put upon ourselves. 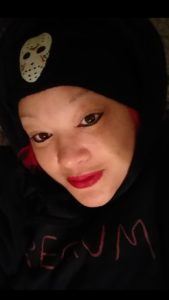 We would like to thank Ravennight for taking the time to answer our questions, but more importantly for her contribution to horror!