From Scream Queens to Stephen King, Shudder Digs into the Past, Present and Future of Horror with New Podcasts She Kills, and Visitations with Elijah Wood & Daniel Noah

Shudder, AMC Networks’ premium streaming service for horror, thrillers, and the supernatural, announced today an exciting trio of original podcasts offering candid conversations with many of the most important and iconic figures in the genre: She Kills, a podcast by and about women in the horror genre, hosted by Adrienne Barbeau; and Visitations with Elijah Wood & Daniel Noah, a unique series that invites listeners into the lives and homes of some of the most creative figures working in genre entertainment today.

“We’re thrilled to be working with amazing talents like Adrienne Barbeau, Elijah Wood and Daniel Noah, who have assembled an unprecedented collection of horror creators for this slate of podcasts,” said Craig Engler, Shudder’s General Manager. “They’ll be exploring timely topics, unpacking the history of the genre and pointing the way to its future by talking to the people who made horror it what it is today.”

She Kills is a Shudder Original podcast by and about women in horror. Each episode pairs notable women—actors, directors, writers and journalists—in frank and revealing conversations about female representation and inclusion in genre filmmaking. Guests include beloved stars like Barbara Crampton, Jennifer Tilly, and Dee Wallace, genre innovators like Anna Biller, Alex Essoe, and Pollyanna McIntosh, and writers, critics and horror experts like Blaire Bercy, Grae Drake, and Dana Schwartz.

“It’s about time we heard more from women in horror than just their blood-curdling screams!”, said host Adrienne Barbeau. “I am honored to be part of this fascinating new podcast featuring the kick-ass women of the genre. From playing victims to villains and vampyres to Valkyries, oh, the stories we have to tell.”

All ten episodes will be made available on Shudder on Friday, March 1, exclusively for its members. Episode 1, featuring a conversation with director Karyn Kusama (Destroyer, Jennifer’s Body), actor Emily Deschanel (Bones) and self-described “actor, host, nerd” Clark Wolfe (Satanic Panic), will be made available to non-members on Apple Podcasts and other platforms, where subsequent episodes will be released twice-weekly on Mondays and Fridays. 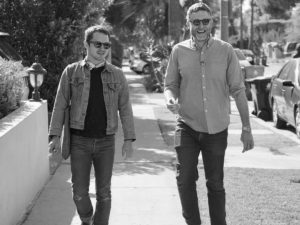 Boundary-breaking indie production company SpectreVision—partners Daniel Noah, Josh Waller, Lisa Whalen, and Elijah Wood—has given the world game-changing horror films like A Girl Walks Home Alone at Night and Mandy. Now, Wood and Noah invite listeners to join them as they drop in on some of their most creative friends and colleagues for casual conversations at locations of their subjects’ choosing—at their homes, on set, or in their personal workshops—in the ten-episode Shudder Original Podcast, Visitations with Elijah Wood & Daniel Noah. Episodes will feature visits with filmmakers Ana Lily Amirpour, Taika Waititi, and John Landis, writer Dan Harmon, musician Flying Lotus, and fashion designers Rodarte, among others.

“We’re big fans of the loose, conversational style of interview shows from the 1960s, and leapt at the chance to document intimate interactions with some of our friends and colleagues creating incredible work in genre and beyond,” said Elijah Wood and Daniel Noah,

The podcast will premiere later this Spring at a date to be announced, with all episodes available at once on Shudder exclusively for its members, and individual episodes made available to non-members on Apple Podcasts and other platforms on a weekly basis.

ABOUT SHUDDER
AMC Networks’ SHUDDER is a premium streaming video service, super-serving fans of all degrees with the best selection in genre entertainment, covering horror, thrillers and the supernatural. SHUDDER’s expanding library of film, TV series, and originals is available in the US, Canada, UK, Ireland, and Germany on most streaming devices for 4.99/month or 49.99/year. To experience SHUDDER commitment-free for 7 days, visit www.shudder.com.

ABOUT SPECTREVISION
Founded in 2010 by partners Elijah Wood, Daniel Noah and Josh C. Waller, SpectreVision was created to tell character-driven stories tackling emotional and human experiences that test the boundaries of the genre space. In 2015, Lisa Whalen joined the company as the fourth partner. The SpectreVision productions of A Girl Walks Home Alone At Night, Cooties, Open Windows, The Boy, and their cult hit, The Greasy Strangler, have earned them spots at the most prestigious festivals in the world, as well as numerous awards and nominations. SpectreVision most recently released Mandy, the 2018 Sundance/Cannes breakout hit that has appeared on 93 “Best Of” Lists, including Entertainment Weekly and filmmaker Guillermo del Toro, as well as Transference, their VR game for Ubisoft, which released on all platforms, garnering 14 awards and nominations, including DICE, Raindance and IGN. SpectreVision has also released, under its SpectreVision Presents banner, the acclaimed films Toad Road, LFO, and the re-release of Beladonna of Sadness.

ABOUT INSURRECTION MEDIA
Founded by Kiliaen Van Rensselaer, Insurrection Media is an independent talent-friendly studio developing and producing high quality scripted shows for over-the-top video platforms as well as broadcast and cable networks internationally. The company has a strategic relationship with HarperCollins where key books in SciFi, Drama, and Comedy are optioned and developed into digital video and traditional television series. Insurrection Media is headquartered in Beverly Hills.