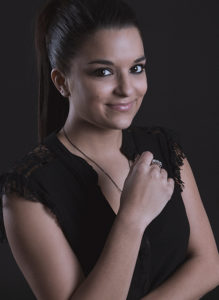 -Chloe: I would say when I first saw the film Stigmata, which is one of my all time favourite movies- so probably like 10-12 years ago. I love more of a supernatural/paranormal type of horror- something that challenges my perspective on the afterlife.

Horror wasn’t something I grew up with (apart from wanting to watch Michael Jacksons Thriller when I was a kid but was banned from it!) it was more something I fell more in love with in my 20’s. I have, however always been obsessed by Halloween and celebrate it every year, any chance to get spooky and enter the dark side that bit more.

-Chloe: Yes just happened naturally really. As I mentioned before I have always enjoyed horror and would rarely go to the cinema unless it was a horror or thriller, I just find it more interesting. The Writer/Director who I work with Leroy Kincaide, is my partner and we have always loved the paranormal and horror movies and when he set up our production company Nocturnal Pictures, it was shortly after that I really decided not only did I want to produce movies, but I really wanted to be involved in a horror movie and then it kind of evolved from there for me.

-Chloe: I absolutely love it, I’ll be honest there aren’t enough if any female horror producers and directors and I’d love to see more of that. I am fairly new to the industry, but hoping to make a dent in the horror world, especially in the UK as a producer.

I feel there isn’t much support for the independent scene, especially horror- so its nice to celebrate others and feel part of a small community who all love the same genre.

-Chloe: Final girl will have to be Sigourney Weaver in Aliens, and villain I’d like to say Aaliyah for her amazing performance in Queen of the Damned.

-Being that this is PromoteHorror.com, please feel free to plug your current/next horror project.

-Chloe: So much to my excitement I am producing my debut feature film “ The Last Rite” which commences principle photography in September this year, so I’m super excited to get stuck into this one. Its also a paranormal horror too which is one of my favourite sub genres.