-Jennifer: When I was young, about six or seven. It was hot, humid evening in the summer time where we all camped out in the living room since that was the only air conditioned room. My dad said he was going to watch a scary movie and I should go to sleep and not watch because I’ll be scared. I didn’t listen. We watched “The Gate”. All night long I thought scary little creature men were going to come out of our garden in the backyard and come and get me! I was terrified! And hooked!

-Jennifer: When I started to self produce, I started out on a comedy webseries. Peers challenged me to a more serious route. I did a drama, but found it unfulfilling. I always loved horror, but was always nervous to take it on because I didn’t know if I could do it justice. I took what I knew: Salem Witch Trails, living in a haunted house, and Paranormal. All this made up “Demonic Attachment”, the first horror short I wrote and starred in. Since then, I’ve gotten darker.

-Jennifer: A celebration of hard work, inspiration, and equality in work. 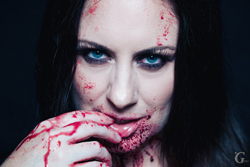 -Jennifer: Maila Nurmi (Vampira). She had an idea. She went after that idea. She did the best she could with what she had and gave every ounce of her being to doing what she loved. That is so powerful. She deserved better.

-Jennifer: We’re no longer the damsel in distress. We may still be the “final girl”, but now we’re fighting back. AND we’re the ones that may even start the fight! Masked Serial Killer isn’t just for guys any more. Killers are taking on so many different identities and come in all shapes and sizes now! I love it all!

-Jennifer: I think we’re on the rise. Things are changing…. Slowly, but they are changing. Women are supporting and pulling for other women! It’s amazing! The sky is the limit!

-Jennifer: SFX artist. I LOVE make up! But what some people can create out of latex and tissues is INSANE! If I weren’t an actress, I’d definitely do SFX.

-Jennifer: Julie James (I Know What You Did Last Summer)
Jennifer (Jennifer’s Body)

-Jennifer: Malvolia: the Queen of Screams has SO much in the works (Numerous Anthologies, 10/31 Part 2 is coming back, my series on my channel and on Morbidly Beautiful…) www.youtube.com/c/malvoliathequeenofscreams. Also, my horror short “THAT NIGHT” was released last week and it is being called by numerous bloggers and reviews my “best performance to date!” You can check that out on my personal youtube channel: www.youtube.com/jnangleactress. I’m attached to a couple features as well, so this year is going to be a wild ride! www.imdb.me/jennifernangle

We would like to thank Jennifer Nangle for taking the time to answer our questions, but more importantly for her contribution to horror!