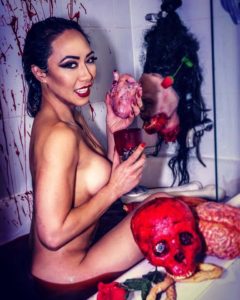 -Tritia: The first time I fell in love with Horror was as a kid watching Michael Jackson’s ‘Thriller’ music video. I loved it so much I made my parents take me to the video shop to keep borrowing the same video every week!! Also as a kid I used to sneakily stay up and loved watching the “Nightmare on Elm Street” movies on TV when I was meant to be sleeping!! I have had an insatiable bloodlust ever since I was a kid.

-Tritia: It was a very natural thing for me to do, as an actor & filmmaker; I have always been interested in action, excitement, the occult and supernatural since I was young, so even most of the time as I create my own works I don’t even think about the genre when writing or brainstorming, I simply incorporate elements that I find interesting (& I always love blood & guts), so then find that the end product ends up being classed as ‘Horror’, ‘Fantasy’ or ‘Action’ or all three!!

-Tritia: I think it is a fantastic opportunity for people like myself to share our work & for showcasing some of the amazing talent we have within the industry.

-Tritia: When we were filming Horror House, I was very inspired by Elvira, and drew a lot from her as inspiration for my role of Mistress Boobyana.  I also really love strong powerful evil villainess characters, but I wouldn’t say there was any one in particular that I consider as a role model, so I just try to create my own characters when I am portraying roles, based upon each individual character’s experience, psyche & motivation.

-Tritia: I don’t really think it has changed that much just in the horror genre itself, but in film & media in general, I think portrayal of women on screen generally reflects the vision of women in society in some ways (albeit very slowly), namely that in the past, women were pretty little things, soft, pure, virginal & weak creatures who always needed protection, whereas now hopefully we are seeing more & more women in leading roles as the main hero or villains rather than just love interests & supporting characters. 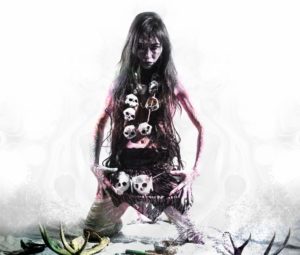 -Tritia: As I said above, hopefully we start to see more lead roles for women, stronger & more complex characters, that have more to them than just a pretty face and a loud scream. 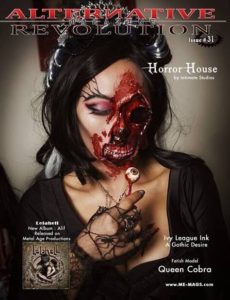 -Tritia: One of my favourite films is ‘The Human Centipede’, so I would love to play a twisted Dr Frankenstein type of character, who loses a loved one from some incurable disease, then goes on a mission to evolve humanity so no one ever has to suffer the same pain in losing loved ones that she did, so the collects her victims and tries to build a new evolved type of being out of her live victims (with many failures along the way), leading to her having a dungeon full of ‘Island of Dr Moreau’ type creatures who end up breaking loose and causing havoc on the world, but then realises the error of her ways and (along with 2 male sidekicks and probably another strong female character), save the world. So she is villain & hero all at the same time, which would show the diversity of character because a lot of time characters are painted either only as entirely good or entirely evil. Hahah I think I just came up with a storyline for a new film!!

-Tritia: Ripley (Sigourney Weaver) from Alien is definitely my fave ‘final girl’ if you can call her that, because she’s not a ‘girl’ but a kick ass hero.  Most of the time the generic basic ‘final girls’ in traditional basic horror movies who spend half their screen time screaming drive me crazy, I’m one of those ppl who sit there yelling at the screen at home at the characters dumbfounded by their stupidity & wondering why they don’t just fight back & always seem to take the stupidest option, then just wishing they would hurry up and die a bloody painful gory death already because they deserve it hahaha.

Villians, oh there were so many that I enjoyed watching!! Visually because I love supernatural things I would say that Carrie, the little girl from the Exorcist, and Samara from The Ring are some of my faves, but in terms of performance I must say my all time favourite has to be Annie Wilkes (Kathy Bates) in Misery.

-Tritia: As a filmmaker, I made an experimental short film a few years ago titled ‘The Kali Geisha Erotica Grotesque’, when one night I was surfing the internet at 4am and came across some crazy stuff (as you do at that time of night), and saw an image of a man tenderly peeling the skin off a woman’s face & licking her eyeball. I was intrigued so I googled more and found this Japanese manga (comic) genre of ‘Erotica Grotesque’ but everything I saw was only men doing things to women, so I decided to make a short experimental film about it and flip the script to have a woman doing those sorts of things to men. I wanted to move away from the traditional dark pallet of horror and do something different, so decided to make it bright and glamorous; to create something that was a cross between a Beyonce music video (in the glamorous style, lighting & colour grading etc), & the movie ‘Saw’ (in the twisted gore factor). It was well received and has won as short film award (Australian Short film Network Film of the Month Winner), as well as being screened in India as part of the official selection at an Indian Horror Film Festival (Sixth Sense Horror Film Festival). It is now going to be screened at a theatre in the USA in March before a feature presentation (thx to the wonderful David Black), and my team & I are currently in pre-production to make a full-length feature based upon the character.

I also play Mistress Boobyana, of the hosts “Horror House” alongside Count Funghoula (David Black), which is a 30min weekly hosted Horror Show hosted by two very over the top vampires (think Elvira & Deadly Ernest), with a lot of bad taste schlock comedy, that in btwn our segments showcases some of the best independent short horror movies from Australia and around the world. We have shot 6 episodes of the series that is currently in postproduction, and will soon be pitched to television networks. I feel very passionate about this project as I think it would be amazing to have a regular platform where independent filmmakers can showcase their work to a larger audience.

Also I recently starred in “Badass Bunyip” an independent horror feature film (also starring, written & produced by David Black), which is a schlock comedy/horror similar to the Ozploitation flicks from the 70s, which is currently in postproduction & due out later this year, so stay tuned!!

We would like to thank Tritia DeViSha for taking the time to answer our questions, but more importantly for her contribution to horror!

“Lobster Girl and Other Tales” Now Available on Vimeo, Plex, and Zumo