In recent years, there have been many who have made a name for themselves in the horror genre. Fans with dreams and admirations, with the drive and determination to make things happen in the industry.

One of these individuals is Robert DiLauro. DiLauro, a now nine year veteran of the genre has entertained fans throughout the world, written three major published books, and was host of his highly successful radio show for almost three years titled Dungeon of Deadly Delights, which included two-time Emmy award winning makeup fx artist Thomas Surprenant and Dinah Cancer of 45 Grave as his former hosting team. 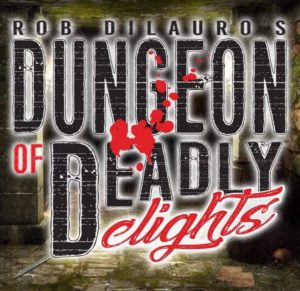 After years of silence in the radio world, he is returning in a different medium and he has an impressive roster joining him for his latest venture. Dungeon of Deadly Delights will be a visual weekly series available on YouTube with Jolene Siana, cult author of Go Ask Ogre:Letters from a Deathrock Cutter, and Deborah Voorhees, iconic actress from the Friday The 13th series, as well as writer/director/and producer of her latest F13 reunion, 13 Fanboy.

The series will focus on special guests, the latest in horror, special genre topics, popular culture, and more.

As DiLauro has stated, “I have thankfully had some great success and had the opportunity to do some incredible things in this genre I am so passionate about. My goal this time is to offer fans an opportunity to join our round table and be a part of the family. I have a great rapport with both Deborah and Jolene, and I think that will show when people tune in. We simply would like to be another avenue for entertainment news that focuses on everything, especially terror in its many forms.”

There has already been interest from individuals at Shudder streaming services who have just released their own podcast network, but as DiLauro said, “We want to prove ourselves to the company as well as to the fans before we pull the trigger on any sponsorship.”

The Dungeon of Deadly Delights will feature on YouTube in late April.

For 30 free days of streaming terror on Shudder type in the promo code Dungeon and receive one the greatest genre catalogs available.