The multi-award winning and former Guinness World Record holders Groovey TV are in talks with the American Horrors Channel to develop exclusive content in the form of a 13 episode season that will air later this year. This series is intended to stream exclusively on the American Horrors channel, available on Roku & online at www.americanhorrors.com. Groovey TV is known for its guerilla style and hilariously sarcastic approach to its content.

“I believe Groovey is a talent that will thrive at American Horrors. His interviews are fun, involving and always interesting to watch.” Said Hart D. Fisher, co-founder of the American Horrors 24/7 linear streaming horror channel. “Groovey’s tongue is a sharpened instrument capable of impaling an elder vampire, let alone a raised in the shadows horror creator, he always draws the best out of his subjects, from all areas of pop culture, for American Horrors, we’re going to narrow Groovey’s focus to the pulpy horror exploitation culture we all know & love.”

Groovey the founder of Groovey TV had this to say, “To be in the development stages of creating an exclusive content television series with Hart Fisher and American horrors is beyond exciting and really a dream come true. My childhood self is high fiving the crap out of me right now!”

More details about Groovey TV on American Horrors will be released as the situation develops. 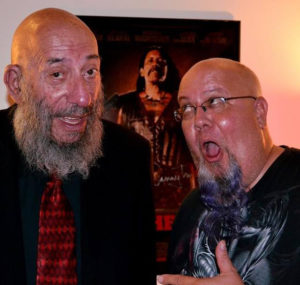 About Groovey TV:
Groovey TV is a closely affiliated group of artistic ass kickers that bring the rain without spilling their beer all the while covering the music, movies, games and events that are undeniably rad. Multi-award winning and former Guinness World Record holders “Most TV Interviews in 24 Hours” which was 70 and was held from 2014 to 2016. The Groovey TV YouTube channel currently has 2 million views and 800 videos.