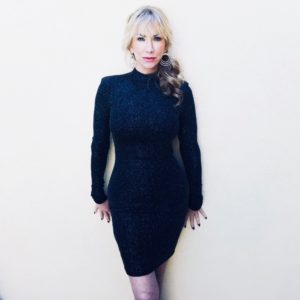 Caroline Williams has signed on to star in the new Bloomquist Brothers’ film Ten Minutes To Midnight. Produced by Mainframe Pictures and Directed by Two -Time Emmy® Winner Erik Bloomquist, Caroline returns to a radio station for the first time since her breakout performance as “Stretch” in The Texas Chainsaw Massacre 2.

When Tobe Hooper and L.M. “Kit” Carson began casting for the sequel to Hooper’s iconic The Texas Chainsaw Massacre, they discovered the punkass actress, who ran screaming down the hallway of the casting office. She burst into the room, pulled the chairs from beneath the duo and played the brief dialogue, while huddled in a corner. In that often told moment, she won the role from 440 actresses from both coasts.

Ten Minutes To Midnight (written by Carson and Erik Bloomquist) Logline:
On the eve of forced retirement, a violent hurricane traps veteran late night radio host Amy Marlowe and her uneasy staff at WLST while her mysterious new replacement shadows her every move.

Recent reviews for Long Lost include:

Rue Morgue: “[With] delicious twists and turns … Bloomquist not only rather brilliantly ratchets uptimes he tension and stakes, [but] also proves adept at building a lust, surrealist-yet-believable world wherein philosophical questions can be pondered and grappled with.”

Film Threat: “[With] exquisite direction, the film is a head-spinning thriller … Bloomquist consistently finds a way to up the ante in a believable, yet nerve-wracking way … that will get under everyone’s skin.”

Los Angeles Times: “Bloomquist keeps the audience as unsettled as his hero with an intense atmosphere that turns even a game of “Chubby Bunny” into something sinister.”

The official website for Caroline Williams may be found at https://www.CarolineWilliamsActress.com

The official website for Erik Bloomquist may be found at https://www.ErikBloomquist.com