Recently released on DVD/Blu-Ray, “Another Plan from Outer Space,” has received some great reviews. This movie seems to offer audiences’ something a little different, so we wanted to give fans who haven’t seen it a chance to learn a little more about it. We were lucky enough to get an opportunity to talk to one of the film’s stars and producer, Hans Hernke. Take a few minutes to find out how this film came to be, where it was shot, what makes it unique, and much more… -PH: What is “Another Plan from Outer Space” about?

-Hans: The film is best described as a 1950’s retro sci-fi film with a twist. The film starts off with 5 astronauts returning from a 2 year mission to Mars. We crash land on Earth, we try to wrap our heads around what is going on, why no help or rescue team is coming hours after we crashed. Our chances of hope start to turn slim, and becomes a fight for survival among ourselves. The film has some clever plot twists and turns the audience does not see coming, and every screening we have had, people said the plot twists totally caught them off guard and they loved it.

-PH: You play the role of Lieutenant Brooks. What can you tell us about your character?

-Hans: Lieutenant Brooks is somewhat of a comedic relief in the film, he loves cigars and greasy Nueske bacon cheeseburgers, he loves sentimental things that have a special meaning behind them. Brooks also has a small crush on Chief Hudson (Augie Duke). He’s a team player, and he has a good heart.

-PH: Is this character similar to other characters you’ve played, or was this a completely new acting experience?

-Hans: This character was definitely entirely new to me, and it was a dream come true to play an astronaut in a feature film. Watching films such as “Apollo 13” and “Armageddon”, made me want to play an astronaut character in a film someday. I watched both of those films, as well as footage of NASA astronauts to get more research and influences for my character. 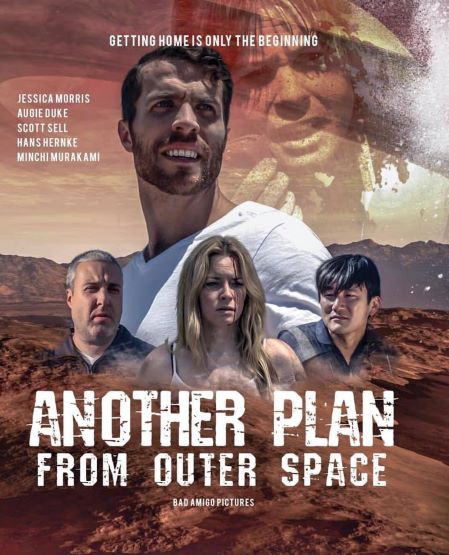 -PH: And how did you get this role?

-Hans: I had worked with Lance Polland, the director/writer/producer in 2012 on a werewolf horror comedy film, “Werewolves in Heat”, I had a small role at the end of the film. Flash forward to Fall of 2016, Lance contacts me again and says “Hans, I have this sci-fi script I want you to read called ‘The Doomed’, and there is a role written specifically for you in this film, Lt. Ben Brooks, check it out and let me know if you are interested”. I read the script the following day and the entire story hooked me in from start to finish, the reveal/plot twist sold me instantly. I was in 100% to be in this and produce it with Lance. December 2016, we met for dinner in Irvine, CA over burgers and drinks, then a comedy show featuring Tom Wilson (Biff from Back to the Future), it was a good evening, that’s when the ball began to roll, we wanted to shoot “The Doomed” (the working title at the time) during the month of May 2017. That was our focus, our projected timeline and we did it. We went straight into pre-production in January 2017 and filmed for 8 days in early May 2017.

-PH: Is this the typical sci-fi space movie, or is there something specific that makes it different?

-Hans: There are quite a few things that make this film different, the shooting style is very hand held and makes it feel like you are there stranded with these 5 astronauts, there are subtle hints of nostalgia, but also a lot of modern day themes as well. I like to tell people, the film is basically 2 acts. The first act, you get to know the characters and their backstories better, see their chemistry as a team, and them trying to figure out what went wrong and why no help is coming. The second act of the film is when things take a twisted turn and stuff hits the fan. The film has a very Twilight Zone type feel to it as well, others have said after watching it. We originally were going to release it in color, but after seeing earlier cuts of it, we decided let’s change it to black and white, it will give it that classic 1950’s retro feel. The black and white adds a lot of character to the movie.

-PH: It looks like a lot of the film was shot in the desert. What was that like?

-Hans: We shot this film entirely in the city of Twentynine Palms, CA. It was scheduled to be an 8 day shoot. We did in fact shoot the film in 8 days! We all stayed at a small ranch house in the desert and used the back property to shoot a lot of the film, and some parts of Amboy as well. It was hot, dry, windy, we had noise from planes all day from the base nearby, interesting neighbors coming over to see what we were filming, there was a lot of elements to hurdle through each day. We kept a fully stocked cooler near set with waters, sodas, capri suns and Kool-Aids which we drank non-stop all day. One day, it was so windy, the wind storm blew down our easy-up tent we had set up for us to sit under between set-ups. We came back a few months later for a day of re-shoots and filming new scenes we came up with during post-production, it turned out to be one of the hottest days of the year, it was close to 115 degrees outside. We had to be in our flight suits in that heat. Brutal, but worth it.

-PH: What do you think audiences will like most about the movie?

-Hans: From what we have gathered from the past screenings, they loved how each character was unique and quirky in their own way, and how you got to see them develop in the first half of the movie, finding out their backstory and struggle for survival. The sound design is another thing we got a lot of praise on. Our sound designer, Iden Kamishin did an AMAZING job creating sound design for the film, and put fresh sound ideas to certain scenes that we didn’t even think about when we were filming it. Iden did all of the sound design at Sony Pictures Studios. Lance and I spent 8-12 hours on Saturdays and Sundays working on sound design with him on the Sony Dub Stage. Incredible and unforgettable experience. Fans also loved the very retro sounding score by Italian composer, Alessio Fidelbo. Overall, I think the main thing people liked most about the film was the plot twist and reveal. You’ll just have to watch it to find out what we mean!

-PH: What was it like working on and off set with cast members like Jessica Morris and Augie Duke?

-Hans: Jessica and Augie were great fun to work with, they brought much life to their characters, they were meant for those roles. They both had good chemistry together and with the rest of the cast in every scene. After we were done filming each day, we would all hang out in the ranch house, have drinks, play games, and even some paranormal stuff. When you see Jessica’s character in the film, she is not like this at all in real life, she is super sweet and down to earth. My parents asked me after they watched it, “was she tough to work with? Her character seemed very stern and unpleasant?” I said “no, of course not if she came across that way in the movie, she did her job, she played her character so well”. Augie Duke was always giggling, bubbly and happy. She enjoyed doing some improv with our lines and just going with it. We had good chemistry on screen. There was tons of dialogue for all of our characters, and Augie, Jessica, as well as the others were totally on point with their lines everyday!

-PH: Where can fans find the movie?

-Hans: “Another Plan From Outer Space” can be found on DVD/Blu-ray on Amazon.com, we also have it playing in the Hollywood South Film Festival in Kentucky July 5th-7th 2019. A VOD release is being planned for later this year through a few outlets like Amazon Prime and Vidi Space. The film is released through Meridian Releasing Group.

Here is the link where it is available for purchase on either DVD or Blu-ray: https://www.amazon.com/Another-Plan-Outer-Space-Blu-ray/dp/B07QRFD2YB/ref=tmm_blu_swatch_0?_encoding=UTF8&qid=1559108955&sr=8-2 -PH: Finally, here’s your chance to promote anything we haven’t talk about. Let us know something more about your movie, future works, or anything else you would like to mention.

-Hans: I am currently wrapping up TNT’s “Animal Kingdom” Season 4 as the stand-in for the character J (actor Finn Cole). I have been his stand-in for all 4 Seasons. I love working on this show, the cast and crew are family and amazing hard working people. Please check out Season 4 now playing on Tuesday night’s at 9/8c on TNT! I am also going to Orlando this summer to film a psychological thriller called “Todd”. I play the character twisted character, Todd. We have a great cast lined up, including Aaron Jackson from NBC’s “California Dreams”, and Michael Winslow from the “Police Academy” films and “Spaceballs”. Past films you can check out are “The Howling”, I play the villain, Shelley. “Red Army Hooligans” I play the role of poker player, Tex Mex, who comes to the UK to play in a high stakes poker game between the British and Russian ultra firms. If you fancy ghosts/paranormal, you can see me in the film series, “Haunted 2-5” as the American Paranormal Investigator that investigates some haunted spots in and around London. Out now, a werewolf horror film called “High Moon” acting opposite Sean Patrick Flanery. Two other films that are coming out in the future that I executive produced and had a small role in was “Art of the Dead” and “Attack of the Unknown” both starring Tara Reid and Richard Grieco!

We would like to thank Hans for taking the time to answer our questions. Hopefully this gave you a good look at his movie, and why you should give it a watch! Again, the DVD/Blu-Ray is on Amazon, and it will be coming to VOD later this year. Enjoy the trailer below…