When a secret genetic experiment combining the DNA from a hulking serial killer, with a brutal breed of pig, to terrifying hybrid monster. 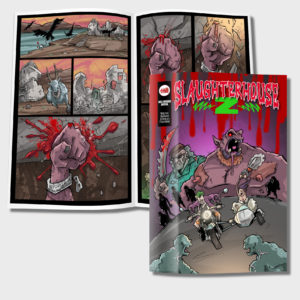 “Porker X”, the terrifying results of merging serial killer DNA with a pig, makes his great escape from the secret lab where he was created and, alongside his prototype hybrids, wastes no time in carving a swathe of carnage throughout the Welsh countryside. It gets worse. e dead are rising, hungry for esh, and Porker X leads this Army of the Porcine Dead in their unstoppable slaughter!

Caught up in the terror are brides-to-be Roxy and Serenity, enjoying a bit of seclusion, sex, and steampunk erotica, on the night before their big day. However, when Porker X turns his undead eye on their cabin, these two will have to ght for their lives. Can they survive or will it be a Wedding Day of the Dead? Spencer Wilding (Star Wars: Rogue One) said of “Slaughterhouse Farm”;
‘I woke up to this Slaughterhouse Farm comic posted through my door and thought ‘What the Fuck!’. So I started to read… and a er the rst page it pulled me in. Great comic; sick and twisted. I loved it!’

Now the writing team behind the controversial “Slaughterhouse Farm” grindhouse slasher comic return with a new slice of carnage in the rst of a three-part mini series, published by Hellbound Media. Written by Matt Warner & A J Ballard, “Slaughterhouse Z” features the twisted artwork of Paul Johnson, known for the “Razor Bastard” series, and the graphic novel “Death Truck”. Warner and Ballard created the iconic horror comic character Pigfucker in homage to classic Video Nasty lms of the seventies, to wide acclaim, and genetic experiment Porker X will follow in his footsteps.

“Slaughterhouse Z” is now on crowdfunding platform Kickstarter, where fans of grindhouse, exploitation carnage can grab not only the comic (with its regular, and limited edition cover designs) but a whole bunch of Slaughterhouse Swag, including original art prints, T-Shirts, badges, and more.