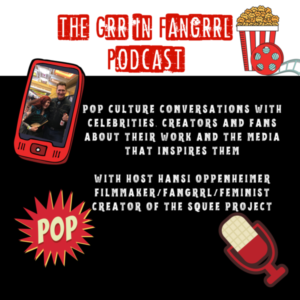 Hansi Oppenheimer, creator of the Squee Project, talks with celebrities, fans and creators about pop culture, fandom, feminism and women in media. Please be sure to like and review so we can get the word out.

Here are a few of her recent episodes…

The Grr in Fangrrl Ep. 8: Conversations with Women in Horror: Dee Wallace

Conversation with Scream Queen and legendary Actor, Dee Wallace. We discuss her work as a life coach, her methods for “Directing YOur Day”, her Ted Talk,, her incredible career including the challenging role in Cujo and her role as the sassy Mildred on Supernatural.

The Grr in Fangrrl Ep. 6: Conversations with Women in Horror: Amber Benson

Amber is best known for her role as Tara Maclay on the TV series Buffy the Vampire Slayer, and has also directed, produced and starred in her own films. Her books include The Ghosts of Albion, the Calliope Reaper-Jones series and The Witches of Echo Park series. She is currently writing The Morning Show Mysteries airing on the Hallmark Channel and a pilot for The Witches of Echo Park.

The Grr in Fangrrl Ep. 5: Conversations with Women in Horror: Jenn Wexler

Conversations with women in horror continues with Jenn Wexler Director, THE RANGER. Producer, DEPRAVED, MOST BEAUTIFUL ISLAND, LIKE ME, PSYCHOPATHS, DARLING.

We discuss Jenn’s first feature The Ranger, currently screening on Shudder, a brief history of punk films and their influence on The Ranger, the punk rock final girl and empowering women in the film industry and on screen.

The Grr in Fangrrl Episode 3. Conversations with Women in Horror: Felissa Rose

We discuss the challenges women face juggling film, family and producing, what it means to be Scream Queen, the power of being an older woman and the solidarity of the horror community.

All of those episodes and more can be found at: 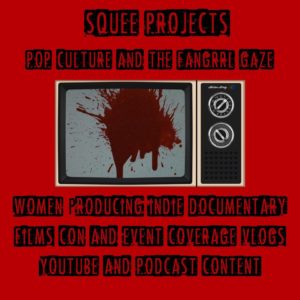 Hansi Oppenheimer is also an independent filmmaker and the CEO of
Squee Project, a media network supporting representation, feminism & diversity in pop culture. We encourage collaboration not competition.

Current projects include a film on Joe R Lansdale with interviews from Brian Keene, Don Coscarelli, David J Schow, Del Howison. Bruce Campbell, James Purefoy, Mick Garris Joe Hill, among others. Her film “All Hail the Popcorn King: The Joe Lansdale Documentary” will be premiering 8/18/19! Check out a couple of teasers below… 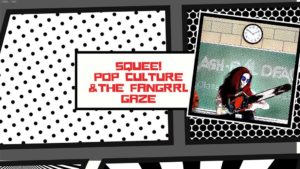 The Late Richard Hatch Enters an Asylum of Darkness this April