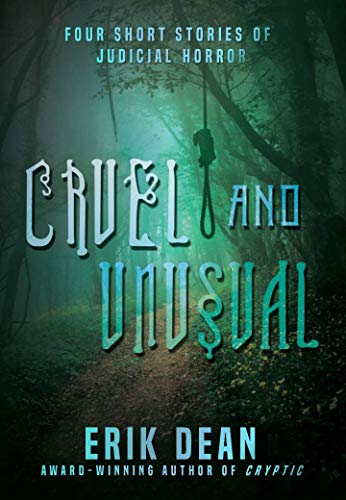 In this set of four short stories, the perennial struggle to catch the bad guys gets the supernatural treatment. Like holding a murder trial in a twilight zone, anything can happen—but in the end, justice will be served.

In “Judge and Jury,” a violent gang tries to make its own rules. But out West, a kangaroo court is the only law, and this time, there’s a ghost in attendance. He knows the truth about their terrible crimes, and he won’t stop until someone pays for it.

Capital punishment gets a vengeful twist in “The Wheel,” as the victim’s family gets involved in choosing the style of execution. It may be cruel to leave things to fate, but the mourners don’t care. They are thirsty for retribution.

Each tale is part moral quandary, part horror story, and together they explore the death penalty in all its forms. Such justice is older than the Salem trials, but the implications extend far beyond the demise of one person. What is right may not always be clear, but eventually, whether it is the accused, the wronged, or the devil himself who makes the final call, the ax must fall.

“Comprised of four short stories, this book delivers on adventure, wit and humor! Subscribing to the “an eye for an eye” theory, the author delivers justice in the most unique ways. Reminiscent of “The Twilight Zone”, Dean’s vivid imagination and exquisite wit will draw readers in and capture their attention until the final page. And if this book isn’t enough, Dean also advises that he has completed a similar anthology-“Crueler and More Unusual”! I highly recommend this read-especially to those who have a propensity toward balancing the scales of justice.”

“Erik Dean shines as his talents grow. This is a must read.”

“I loved this group of short stories. Engaging and entertaining. I highly recommend this book! You will not be disappointed.”

Do yourself some justice and get your copy today at:

The stories don’t end there… 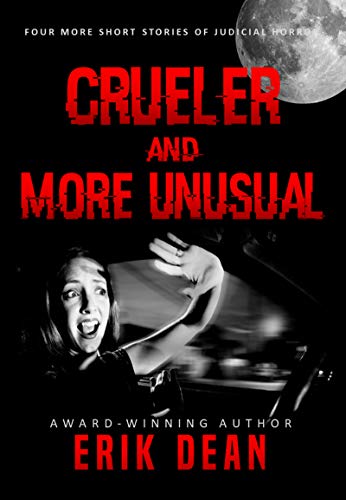 Robert Holman failed to heed the warnings and an innocent night out turns into a nightmare. What punishment is fitting for this Dummy? He realizes too late that being sorry is not enough, and that there’s no hiding from the vengeful hand of fate.

An amendment to the US Constitution allows for grieving families to apply for Early Release for the prisoners who murdered their loved ones. The prisoner is set loose and the family has twenty-four hours to exact their revenge. If they don’t kill the prisoner within 24 hours, they’re awarded their freedom.
Kelvin Heyer, a bank robber, is the lucky winner this time. Will he outrun his victim’s vengeful family long enough with a little help from a Friend?

Best friends and business partners Carlos and Luis are thrilled when their swimming pool design company wins the lucrative bid to build new public pools in Phoenix, Arizona. Their delight is spoiled by a business rival and Carlos’s growing—and mutual—attraction to Maria, Luis’s wife. Lust, passion, and greed quickly build up to murder and betrayal.

In the future, trials take place in small pods instead of courtrooms and most cars are driverless. Holly Barlow is one of the few people who still prefers to drive her own car, but she is caught speeding and must pay a fine. She quickly learns that the court pods do more than simply accept payments for fines—they can also vaporize lawbreakers, carrying out executions instantly… and automated systems are known to break down from time to time.

From courtrooms of the present and into the future, you’ll enjoy these ironic and horrific tales with a twist. 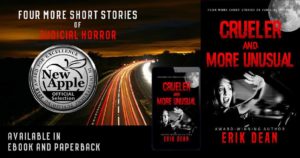 “I loved this book! Erik Dean is a storyteller of the highest caliber and I was gripped by Crueler and More Unusual. His vision of a judicial system of the future is especially terrifying as it is so plausible. The subject of capital punishment is a contentious one, whatever your beliefs, and the subject is handled perfectly. I cannot wait to check out Erik Dean’s other titles and will highly recommend this book to friends. This is a great read and would look amazing on screen! Watch out for those twists; they will leave you open mouthed!”

“You’ll find intrigue, love, betrayal, gore and intense action in these stories, each written to entertain readers and make them feel chills at times. I love this author’s ability to write clearly and in a concise manner. In very short paragraphs, readers are offered a whole story with a beautiful structure and characters that actually undergo some form of transformation. The art of the short story demands a certain skill and Erik Dean seems to have it in abundance. This author is a great storyteller who will entertain you in a few minutes.”

“Suspend your own disbelief and read Crueler and More Unusual at your own peril and pace. Chilling!”

Don’t wait…get your copy of this chilling book today at:

Award-winning author Erik Dean works include, Garbage Man, Cryptic, Cruel and Unusual, Crueler and More Unusual. The Arizona native, is a radiology technologist, who has over 25 years of experience in radiology. At times, Erik uses his medical knowledge, when writing his novels. In his spare time, Erik enjoys reading horror and action-adventure novels. Additionally, he watches many different kinds of cinema, the classics, horror, action adventure and sci-fi. His favorite animal is a border collie. Erik strives to put into his novels, memorable characters and situations, that never have been done before. He wants to keep his reader guessing and not make his stories predictable. In 2017, his novel “Cryptic” won first place “11th Annual National Indie Excellence Awards” and “The New Apple Awards” in the horror category. In 2018, his novel Garbageman won the finalist IAN award for action-adventure and Cryptic won the finalist IAN award for horror. Erik Dean is currently penning his 5th book (the third book in the Garbageman series) called “Wraith.” 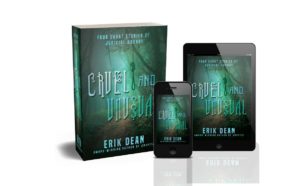 You can find more of his books on his author page at: