Following the controversial first private screening at the Appell Centre, it has now been announced that The Special with start its festival run by headlining the Buffalo Dreams Fantastic Film Festival the weekend of August 23rd. 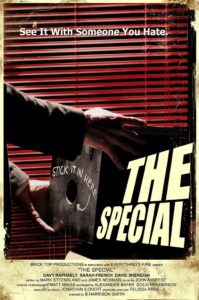 The latest horror from director Harrison Smith has been described as both, “Disturbing” and “Shocking horror” has already seen come controversy when a couple walked out of the first screening, but a standing ovation and first critical reviews have shown that the film has had a positive response amongst horror fans.

At this time very few details have been released regarding The Special, with early audiences asked not to give away any spoilers regarding the film. Most notable what is contained inside the box.

The script for The Special has been adapted by co-authors Mark Steensland and James Newman and is based on the novella of the same name. Proving more than just a horror film, it also serves as a stark warning regarding infidelity and obsession.

Interview with “Another Plan from Outer Space” Actor Hans Hernke

iTunes Horror Pre-Orders: All Through The House Santa Slasher