Ribbons is the fourth of a planned five books in the Starblood series, and is due to be published on September 13th 2019 by Vamptasy Publishing (an imprint of CHBB). While the first three books are full of despair and confusion, Ribbons takes a step toward redemption. In a stand off between gods, in a post-apocalyptic world, hope is born. Freya learns to sacrifice her selfish nature and becomes a leader of men.

Tagline – Psychopaths shall inherit the Earth.

Blurb – The rum bar seems a cosy setting to wait out the apocalypse. When the rain stops falling those who are still breathing are forced to reevaluate their lives. Edensun, The Bringer of Chaos, and Freya’s paths are destined to cross, but when they come face to face who will be the hero and who the villain? The Morrigu gather; they are told their fate is to save the world from Chaos, but they worship a goddess of war whose intentions are dubious. Only the witch in the tower block seems to know the truth and she is unwilling to share.

Excerpt – The rum bar seems a cosy setting to wait out the apocalypse. Other than the ruby smears down the ersatz leaded windows and the occasional battered body, stumbling against them from the pavement outside before lurching away again, Marian can almost pretend it is an ordinary day. Of course ordinary is a relative term. Marian’s ordinary days can be compared to many people’s worst nightmares. It amazes her that she’s here at all. Only her connection to higher forces keeps her functioning. After everything that’s happened she still has responsibilities she cannot avoid.

Order for reading –
Book 1 – Starblood – Star craves freedom, but her lover, Satori, refuses to let her go. He casts a spell to make her love him again, opening a gateway through which Lilith, mother of demons, enters their lives. Lilith serves no man. Instead she seduces Star, assuring her that there is no shame

Book 2 – Psychonaut – Satori has promised Star he will save her and he isn’t about to let her death stand in his way. He battles demons, travels worlds and faces the wrath of human law, but he refuses to give in. Meanwhile Star is in another world, being tortured by a goddess and a demon baby. She doesn’t have time to wait around to be saved.

Book 3 – Black Sun – Murder, magic and obsession tear the heroes from the bliss they deserve. Star and Satori are being hunted; something is playing with their lives. Star found her power in another world, but will that be enough to save them? In a game of revenge, lovers and friends are moved around a cosmic chess board; death and madness are the final penalties for defeat. Who can judge whether the self-destructive human psyche or obsessed demon-child is the more dangerous force? Amazon link – http://smarturl.it/BlackSun

a graphic novel will be available circa late 2020 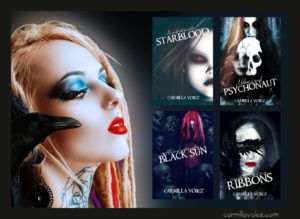 The Starblood series and diversity in horror – Diversity and representation might be current buzzwords, but they are also important. The Starblood series has strong women at its heart, with themes of sexuality – including bisexuality, and self-identity. The antagonist is a woman who rages at the world and the protagonists are searching for their places in that world.

A note from the author – “Days before my 40th birthday, in 2011, Starblood was released by Stone Circle Publishing. The first book became a trilogy and then, in 2018, Freya returned to my dreams and told me her story wasn’t finished. It was then I started writing Ribbons.

Starblood was written during a difficult period of my life. I had given birth to my second daughter and was struggling to bond with her while keeping some sense of my own identity at the same time. In addition the business I had been running (with my then husband) for over a decade was failing, and my marriage was on the rocks.

Star’s struggle to discover who she is, when all the layers of what others want her to be are stripped away, was very much my struggle. I was in a state of depression and suicidal. I honestly believe that writing the Starblood series helped me answer the questions that haunted me at the time and saved my life (although not my marriage). Ribbons was written post-trauma and I believe the hope that radiates from that book is part of me now.

I was shocked and surprised by the overwhelming positive reception the first three Starblood books received. It is a frequently painful read and more than a little trippy, so that it resonated with others amazes me. What I have realised over the years is that my story is far more common than people would like to admit.

Since writing Starblood I have read work by people like Thomas Ligotti, which has taught me that part of the appeal of Starblood is that many of us never feel as though we fit comfortably in this world. We all flounder about at times trying to find a way to fit in without compromising what makes us who we are. I realise that my instinctive feeling that the world is both cruel and insane is far from uniquely mine.

On the flip side the message, I hope, that people get from the stories is one of self acceptance. So what if we don’t fit in. We are still important. We have value. Our dreams mean something, and as Lilith says in the first book, “There is no shame in love, only completion.” I hope people can see

that Lilith is not only talking about romantic love at this point, but also love and acceptance of self and the multi-faceted, unique and marvellous people we have in our lives.”

Psychonaut is a story of redemption. In it the main characters learn their flaws and find ways to rise above them. Star, Satori, Lilith and Donna are all changed in profound and positive ways during the narrative. In this way Psychonaut is an uplifting book, especially after the desperate pain and suffering of Starblood. 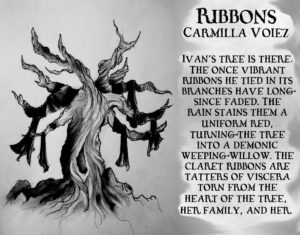 Author bio –
Carmilla Voiez is a proudly bisexual and mildly autistic introvert who finds writing much easier than verbal communication. A life long Goth, she is passionate about horror, the alt scene, intersectional feminism, art, nature and animals. When not writing, she gets paid to hang out in a stately home and entertain tourists.

Her books are both extraordinarily personal and universally challenging. As Jef Withonef of Houston Press once said – “You do not read her books, you survive them.”

Her website and blog can be found at www.carmillavoiez.com

Sunday Scares: “Things That Go Bump in the Night”