Source Point Press and Comics Experience are proud to announce the release of THE FAMILY GRAVES, Vol. 1, FIERCELY FAMILY, the upcoming trade collecting the first arc of the hit indie series described by Phil Hester as “a satisfying combination of The Incrediblesand classic Universal monster films.” 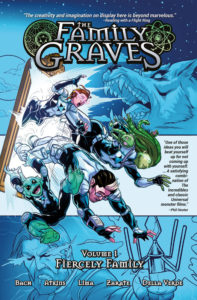 An all-new dazzling cover by series artist Brian Atkins and colorist Juancho invites readers to jump into the first four issues just in time for Halloween. Releasing in October, and in the August edition of PREVIEWS for preordering now (AUG192208), the trade also includes never-before-seen variant covers by Joe Eisma, Megan Levens, Lorenzo Lizana, and Robert Atkins along with pinups by Drew Moss and Craig Rousseau, early character designs, and more.

THE FAMILY GRAVES is equal parts horror, heroics, humor, and heart:
When a dysfunctional family of monsters discovers a set of magical mirrors and the dark power they hold, they race across dimensions to capture the mirrors and prevent a chronal vampire from devouring the space-time continuum and destroying reality. But can the werewolf dad, medusa mom, teen siren, fish-boy, and adorable baby zombie stick together long enough to keep reality from falling apart?

Timothy Bach’s fun, adventurous script blends science fiction and a love of classic monster movies to create a supernatural tale with heart. At its core, this is a family story—primarily about fathers and sons—dressed up in the teeth and claws of a marvelous monster story. 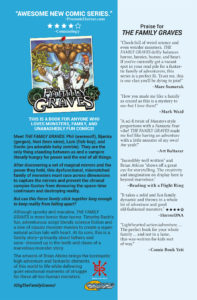 The artwork of Brian Atkins brings the bombastic high adventure and fantastic elements of this world to life while delivering quiet emotional moments of struggle for these all-too-human monsters.

”She Will Return” on October 13th