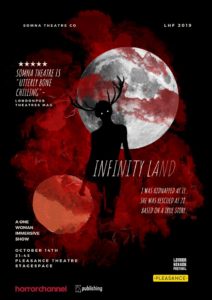 “Mama had a baby and her head popped off…do you know that one?”

J is building a city. A city made of fabric, tarps, curtains, table cloths and careful stitching.

Something that’s stretching into the woods, Growing and breathing.

Kidnapped and held captive in a tent for 17 years, J seems to finally be trying to make sense of the ordeal. Or perhaps that’s just what she’s telling us. It’s hard to tell, she just keeps building. Either way, something’s screaming from inside. She’s telling us it’s angels.

Based on the case of Jaycee Dugard.

Following the success of ‘Who Put Bella in the Wych Elm?” ★★★★★ “Infinity Land” is Somna Theatre Co’s second show in their true-crime series. Inspired by the rampant sexualization and fetishization of serial killers and serial crime, Infinity Land fights back reminding us that women are not simply bodies, numbers, and shock fodder. An unflinching, gut-wrenching piece about female trauma, the alienation of motherhood, and how we physically manifest our losses. Infinity Land holds the audience close, using immersive design techniques to build an intimate tarp-world around them. Audiences come face to face with the realities of the binge-worthy stories, not letting us forget the victims involved in heinous traumas.

“A good mother brings home wherever she goes”..

Tickets are available at: https://www.pleasance.co.uk/event/london-horror-festival-infinity-land#overview

LHF is “the UK’s original and largest festival of live horror performance. The festival return from the 8th-25th October 2019 at The Pleasance Theatre Islington, and 8th October – 2nd November 2019 at the Old Red Lion Theatre. Scaring the living daylights out of audiences since its inception in 2011, the London Horror Festival is a celebration of the ghoulish, the thrilling and the downright macabre. This year’s sponsors are The Horror Channel and PS Publishing.

Somna Theatre Co was established in 2018 by husband and wife team Robbie Heath and Morgan Noll. We are a collective comprised of recent graduates from the Royal Central School of Speech and Drama. Our work focuses on strong narrative story-telling combined with the liminal, the uncanny and the in-between. We have a heavy emphasis on atmospheric design and sound. Previous work includes: Who Put Bella in the Wych Elm? which received a 5 star review and is now being transferred to run at The Space Theatre this November. In Sickness and in Health a new musical that scratched at the Lyric Hammersmith as part of the Evolution Festival, and a revival of Philip Ridley’s The Pitchfork Disney. In Our upcoming spring season the company is producing work by We Talk of Horses theatre company and Flux Theatre’s artistic director, Will Adolphy in an exciting double bill.