Who will be the King?…

A Podcast that is going to pit our favorite horror movie monsters against each other until there is one left standing as King of the Monsters!

We take a look at the two films The Mutilator and Chopping Mall. We tell you our thoughts on themand if you should give them a watch. 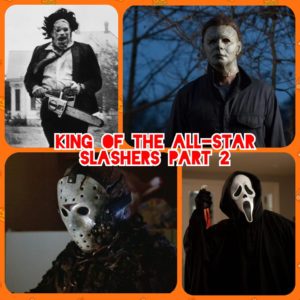 Today’s episode pits Leatherface, Michael Myers, Jason Voorhees, and Ghostface against each other,. Who will move on to the next round? It’s all up to you to decide! 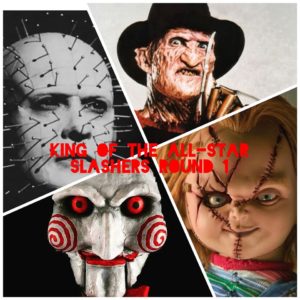 Today’s episode pits Leatherface, Michael Myers, Jason Voorhees, and Ghostface against each other,. Who will move on to the next round? It’s all up to you to decide!In this first episode we are pitting Freddy Krueger, Jigsaw, Pinhead, and Chucky against each other. We look at their films, social impact, and who would win in a fight to make our decision on who we think should move on. Then we throw the question to the audience by letting you guys vote in a poll to decide who will win for this week.

“All horror fans have argued who their favorite monsters are and things like who would win in a fight. This podcast takes all of that and also looks at things like social impact, box office numbers, and even some of their best kills. Then they throw it back to the listeners and have us vote on who we think should win. If you are into horror you should really check out this podcast because the more people who jump in early on the better the results will be when the king of the Monsters eventually gets crowned.”

“It has taken me back with all the different films they talk about. I enjoyed hearing their perspectives and then getting to have our voices heard by voting in their polls. I can’t wait for more episodes and to eventual find out who gets crowned king of the monsters.”

“This podcast is a must have in all horror fans podcast library. So far the structure of the podcast matches most starter podcasts I listen to. I say this as I know this podcast will take off and become a cult classic. So bare your fangs, horror fans and prepare to crown the King of the Monsters!”

For more details and to vote on their polls, please visit:

You can also listen on: