Frank (Justin Long), an opportunistic insurance lawyer, thinks he’s in for the time of his life when he goes out on the town to celebrate a soon-to-be promotion with his co-worker, Jeff (Donald Faison), but their night takes a turn for the worst when Frank is dosed with a hallucinogen that alters his perception and changes his life forever. He is thrown into a psychedelic quest through board meetings, nightclubs, shootouts, and alternate dimensions. As Frank ping-pongs across reality, he finds himself on a mission to find a missing girl, himself… and his wallet.

The film was produced by Robert Dehn and Monte Young, and produced for EchoWolf by Lucas and Joshua Bunting. It was co-produced by Andrew P. Aguilar and Seth Farley, with Jason Bender, Suzanne Niedland and Kevin P. Towler as executive producers, and Brian Ankrum and Nia Kingsley as associate producers. 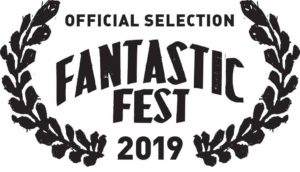 THE WAVE is set to world premiere at Austin’s famed Fantastic Fest on September 21st at the Alamo Drafthouse South Lamar, and will be released by Epic Pictures.

EchoWolf Productions is a California/ New Mexico based production company, specializing in bringing high-end production value to art-house genre films. The experienced team has spent several years assembling a program that can be quickly adapted to maximize the dollars spent on low budget features.

SOMETHING IN THE WOODS – Official Trailer