‘Seance: Conversations in the Dark’
by Christopher Howell 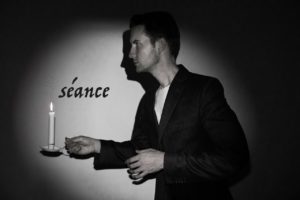 Nightmares and phantom legends form the backdrop of this new interactive seance show presented in one of London’s most haunting venues. The participants in each audience invite the spirits into the space to share their wisdom, exorcise their demons or complete their unfinished business.

Driven by memories of night terrors as a boy, Christopher Howell’s seance takes a haunting look at what lures us to seances. As we flirt with the supernatural, do we seek comfort in reaching out to loved ones who have passed? Or do we crave the raw fear of a ghostly encounter?

Christopher Howell is a Member of The Magic Circle. He has performed around the world including at The Magic Castle in Hollywood, The Wintergarten in Berlin and the Hackney Empire in London. He is the co-creator of the magic variety act Norvil & Josephine. He has a BA in Theatre Arts from Richmond University and is an associate of master clown Ira Seidenstein.

Directed by the 2 times Offie Nominated director Scott Le Crass who previous credits include Country Music (Omnibus Theatre), Elmer (UK and International tour) Sid (UK tour) and Kicked in the Sh**ter (Hope Theatre, Theatre in the Mill, Bradford). He is a working class director who wants these voices represented on stage.

REVIEWS FOR CHRISTOPHER’S PREVIOUS SHOWS INCLUDE:

“A beautifully paced and spellbinding act.”
The Stage

Running time: 50 mins with no interval

‘Fractional,’ is a Twisted Psychological Horror from Writer/Director Malcolm Deegan