“I am told that I have a no bull attitude”, says the director of one of the year’s wildest horror movies, PUMPKINS. 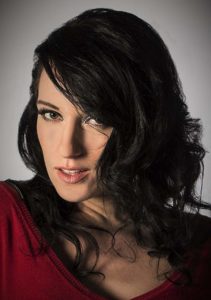 -PH: What inspired you to become both an actress and a filmmaker (look at you go!)?

-Maria: I absolutely love seeing how both sides of the camera work. When I started out just Acting I was really interested in the whole process and observing all the jobs people did and how other indie directors could take on the job of like 10 people. It’s such a feel good experience as a director seeing other people around you be passionate and really get stuck into a project which you’ve created from nothing. It was all the 80s and 90s films that made me want to direct as well as get into acting, it always looked like so much fun!

-PH: What has been the main motivation in crafting movies for yourself to act in? more control?

-Maria: To be honest I never write a film with the intention of casting myself. I usually have all the actors pop into my head as I am writing and then mould the character around the image of these people. It so happens that I come across a character in the script that I quite fancy so then I decide that’s the one I’m doing. I wasn’t going to be in Pumpkins originally playing Shelly, that was meant to be someone else but it never came about and then the only person I could see as the character after that was me. It does make it easier though in terms of control as well as saving money as I don’t have to pay myself, so That’s a bonus.

-PH: How hard was it to get PUMPKINS up?

-Maria: It wasn’t hard at all it was a very nice and easy process. We finished the script, found a DOP , booked locations and cast the film. I then scheduled in blocks of 3 or 4 days at a time over a period of 1 year. So in total it only took about 14 days to shoot the entire film with a crew of 3 people Myself, Will and Gary Rogers.

-PH: And did you always envision directing it, too? Or was it just something you planned on writing?

-Maria: As soon as I decided I was turning the script into a feature film I knew I was going to direct it. I knew how I wanted the film to look and how I wanted the characters to work etc so wanted the full control of those artistic decisions.

-PH: How close to your character are you? Any similarities? Ha!

-Maria: Haha! In am told that I have a take no bull attitude but really lovely at the same time so I guess you could say so as Shelly is very loyal to her uncle in both stages but will not be messed with by anyone who tries to get in the way.

-PH: Having worn several caps on the film, is there one you know prefer over the other?

-Maria: I actually love Directing as much as Acting, I’m pretty even with that. I would like to be able to get other people in for special effects as I really would like to have it done right and as written in the script rather then having to compromise due to my lack of money/ability in that department.

-PH: Have doors started opening as a result of Pumpkins?

-Maria: Well I have just finished another feature film called Bite Night which again is 80s/90s style. It’s not a slasher film though, I don’t really know how to describe it, it’s very strange and ridiculous but We had a great time making it. It’s a black comedy horror film really. So that will hopefully be released next year! I am just hoping I can get a budget for another film following that and keep making as many movies as possible. I’m working for a production company in Wales currently as production manager and Director alongside Kat Clatworthy, doing a comedy feature film called ‘Cowgirls Don’t Lie’ that is almost finished too and I’m having a great time working there!

-PH: Any advice for any budding actors or filmmakers – besides grow a veggie patch?

-Maria: Well all I can say based on my own experience is don’t expect anyone to do anything for you, you have to make it happen yourself. Invest your own money in it if you believe in it enough and if you don’t have any money then find like minded people who will be happy to invest and collaborate their skills and time to make it happen. Most important, never listen to negative comments, they will always be there no matter how utterly perfect something is, you can’t avoid it. Do it because you love doing it and not because you’re trying to impress other people.

PUMPKINS is now on DVD and Digital from High Octane Pictures