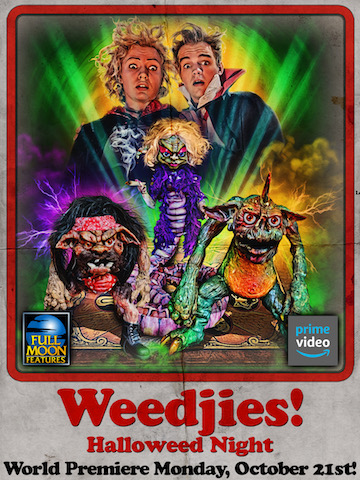 Full Moon premiered the rowdy monster comedy WEEDJIES! HALLOWEED NIGHT by Director Danny Draven on October 21, 2019. This is the first feature film to be released from the highly anticipated DEADLY TEN anthology and will be available exclusively on the Full Moon Features Channel and App, and Full Moon’s Amazon Prime channel. Fans who have followed the live production and ensuing post-production video updates surrounding Draven’s magnum weird weed opus on the DEADLY TEN website, are in for a treat when they see this final, freak-out cut.

And get ready because once WEEDJIES! hits, Full Moon will be prepping the next DEADLY TEN feature for release, NECROPOLIS: LEGION by Director Chris Alexander (QUEEN OF BLOOD). A dark-as-pitch paean to possession film, NECROPOLIS: LEGION stars Lynn Lowry (David Cronenberg’s SHIVERS, George Romero’s THE CRAZIES) and features a score by legendary composer Richard Band (RE-ANIMATOR, FROM BEYOND). NECROPOLIS: LEGION will premiere on November 18th on Full Moon Features and Full Moon’s Amazon channel.

Please visit www.DeadlyTen.com for more information on all 10 films in the D10 slate.

Remake of ‘Don’t Look in the Basement’: Set to Star Ex-MISFITS Guitarist DOYLE