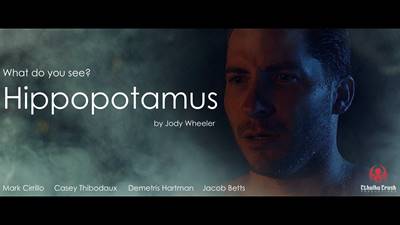 Left alone to caretake a gay nude resort closed for the season, a man finds himself confronted by what he can see — and what he can’t. When everything is visible, when nothing is hidden, what do you see….and what is It that sees you!?

Director Jody Wheeler was inspired to write the film while enjoying a night of hospitality at a ‘clothing optional’ Inn.”I was enjoying an added night of hospitality at The Triangle Inn, a clothing-optional hotel hosting many of the guests and filmmakers at Palm Spring’s Cinema Diverse LGBT fest. That extra night gave me the entire compound to myself, as all my fellow attendees had checked out and the regular paying guests wouldn’t check-in until the next day. So with the evening calm, the night peaceful, and the pool so very damn inviting, it was time for a dip.

I pushed out and floated into the center of the water, felt the hot breeze on my wet skin, and watched the stars ride their black basin above me. Taquitz Canyon held the night quiet and close, my pool at the center of it all. The misters, ever ready in hidden corners of the patio, to action as the pool failed to tame the sultriness of the night. The air perspired with an obscuring fog that curtained the pool, hid the inn, and created a certain and affirming solitude. Within, within, within, I had the world all to myself.

Until that ominous noise tore it all apart. It was the HVAC on the top of the hotel.

The massive air-conditioner above the guest rooms had roared to life, called to work to exchange heat for cold. It’s unfamiliarity, its suddenness, its juxtaposition against the natural quiet I was dreaming in had blown open my fears. Hidden in that same fog that hid me, I heard it as a terrifying instead of a simply ordinary noise. The monsters I was certain that were coming for me? They that lived in the fog? They that prowled behind this mist? They that thought to murder the normal of the world? They were dead. Vanquished. It was again just me alone, naked, floating in a pool, the inn empty, the world quiet. Only I wasn’t by myself. I now had a story I wanted to tell.”