The impressive development of genre cinema in Latin America deserved a wide and plural diffusion space, which serves as a trench for the directors that make up the army of the fantastic Latino.

The website investigates the careers of the incipient figures and referents of each territory, reviewing their filmographies through news, interviews and artistic profiles of the Latin star system. The main objective of the website is to disseminate the novice filmmakers of contemporary genre as well as to highlight the work of foundational and unorthodox filmmakers whose work has allowed the proliferation of projects and the emergence of new exponents in each territory. Visit the website to find yourself in front of the darkest and most disturbing stories coming out of the minds of those who make up the army of directors of the fantastic Latin American.

A space run by filmmakers, for filmmakers and enthusiasts. 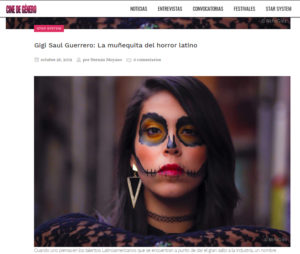