Elin-Margareta Nordin and Mark Denham each grew up wanting to work in films, and have done so both in front of and behind the camera. Their paths eventually crossed, and they’ve worked on several projects together. Check out our conversation with them, as they discuss their careers, love of horror, their new film the “Toy Box Killers,” and more…

-PH: Where did your acting career begin?

-Elin: I have always wanted to act and perform since I was a child but I was 15, back home in Sweden, when I was in front of a real professional camera. I got into a good school, high school, that was focused on media, theatre and to grow, respect and understand the industry. It had its own tv channel and I was lucky to have had people around me who wanted the same and who also were professionals.

-PH: You’ve lived in different places while getting your career started. How have those travels effected your acting?

-Elin: Oh yes, it has affected my acting in a big way, in a good way. It has forced me to be flexible in my work and in my acting and I love it. As an actress, I can’t just stay in one place, I have travel, it is part of the job.

PH: So when did you know you wanted to be around theaters, and films?

-Mark: At the age of 12, a friend of the family, who is a theatre technician took me under his wing and showed me the ropes. from that point I fell in love with theatre. A few years later while working as a TV extra, I saw the director and the work he was doing and at the moment knew I wanted to create films and now I do.

-PH: You’ve worked in front of, and behind the camera. Which do you prefer and why?

-Mark: That’s hard to answer, I do prefer to be behind the camera. Seeing the story and my vision coming together is such a great feeling. You feel physically sick with excitement when you see your rushes for the first time, but it is also great fun to be in front of the camera.

-PH: Has spending some time as an actor made it easier to direct and write?

-Mark: It has made directing actors easier because it gives you, insight into the needs of the actor. Writing is different, you need a good imagination. Directing helped make it easier to write because I close my eyes a visualize the scene from the point of view of a director before writing the scene. 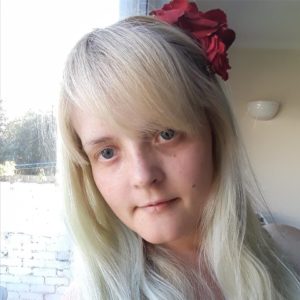 -PH: You eventually found yourself working on horror films. Have you always loved horror?

-Elin: Ohh yes, I love horror, I have always loved horror, everything that has to do with horror. I’m a big horror lover, a nerd and I love how the horror world is so open and fun, I remember watching IT as a child and going to video stores renting horror movies. Working in horror has gotten me more work, before I could hear, “You look young, you can play this young teen”, it was great roles but as soon as I started to focus on horror, I was feeling “wow I can play any roles”, dead people, zombies, sick people, cannibals, adult, anyone. I still do roles in other genres but horror is my home, I feel home.

-Mark: When I started, I hadn’t found my niche so I was doing all genres, until I met my wife and she has a love for horror. I took her to all the latest horror movies released in cinema which opened my eyes to horror and I fell in love with genre. My wife says I’m good at horror, because I am a horror lol

-PH: One of your short films “Mabel” won best horror short film at the Royal Wolf film Awards. Can you tell us what that film is about?

-Elin: Peg Entwistle. I have always been fascinated with her, she was an actress who sadly is remembered by her tragic ending instead of her talent on stage and film. Out of respect for her and her family, I changed the name and location so I named her after another great and talented actress Mabel Normand. When “Mabel” won best horror, I was happy that after so many years of working so hard it finally paid off, getting awarded. I have a feeling that Peg was also awarded that day, she was the inspiration.

-PH: You served as writer, director, and actress on that movie. What was it like to have so much responsibility on the film?

-Elin: It´s not easy but I did it because I love it and I had the idea in my head of what I wanted and I get very protected over my projects so have the responsibilities it´s all on me. I have a “this is what I know and I can do” attitude and with that responsibilities and attitude, it brings results.
“Mabel” was my baby, a dream film coming true and I wanted it to be perfect. I did it Peg.

-PH: Since you’ve acted, written, and directed, which do you prefer to do?

-Elin: Directing, I love it but I also love writing and acting, I love to be creative and see it grow. I´m very passionate about the job and the projects, as soon as it starts as an idea it becomes the film, the series and being a director and the writer is amazing. I’m very happy to see where I am today, where I started and to direct is awesome but one thing I really love is editing. Being an editor is just amazing and I love not just directing but being the one who puts all of it together, piece by piece. It is art. 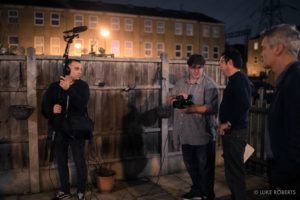 -PH: Let’s talk about one of your recent films the “Toy Box Killers.” How did that come to be?

-Mark: One night I woke up around 3am with the idea and couldn’t get back to sleep until I began writing the script. I always wake up with ideas and just have to get them written down before I forget. I had a writer’s block halfway through writing the script and asked Elin-Margareta Nordin for help and she was able to help me get pass the block and co-wrote the rest of the script with me.

-PH: Is this the biggest movie you’ve written and directed so far?

-Mark: So far yes, I have written and directed various shorts but Toy Box Killers is the biggest so far but am looking forward to my next big thing.

-PH: What’s the film about?

-Elin: Samantha and Daniel, a couple in love who loves murders and torture. It is awesome, I love Daniel and Samantha, I love the movie and the story. When Mark told me about the idea, I was “I want to be part of it”.

-PH: What’s your role in the film?

-Elin: My role is Samantha.

-PH: What was your biggest challenge in making this movie happen?

-Mark: The biggest challenge was scheduling so that all actors could be available. Elin-Margareta Nordin was one of the leads but she had moved to Sweden, so I had to organise everything to be able to film all her scenes in the 4 days she returned which wasn’t easy but I knew I could do it with the help of my team.

-PH: You worked with Elin-Margareta Nordin on this film and others both in front of and behind the camera. What do think makes you guys a great team?

-Mark: We both have similar visions and are able to work easily together. I don’t really know we just click as a team, she’s like the little sister I never had. We both are very passionate about film.

-PH: Here’s your chance to promote anything we haven’t talk about. Let us know something more about the films we talked about, other films, future projects, or anything else you would like to mention.

-Elin: Mark and I have another project coming, it´s called “The Untitled Show: The Interview”. Mark is playing the lead role, he is perfect. It is a supernatural horror series, “The Interview” is the first episode of a 6 or 8 episodes series. We have more projects on the way. There is also films in festivals that we have worked on.

-Mark: I’m working on various projects, such as the untitled show, directed by Elin-Margareta, where I play as Michael, a journalist who investigates and writes about the paranormal.

I also have one of my horror scripts competing in the Beverly Hills film festival, will have the results 10th Feb 2020. The script is called, Dark Horror Show, which is something along the lines of Tales from the Crypt but is much darker. Very excited to direct this once I have found the budget. I think it could build a cult following.

I am writing a script which I hope I can convince American Horror Story to create because I created it with them in mind, in the very first season they spoke of a killer that appears when you call him by looking in the mirror saying “Here piggy, piggy.” So I have started writing a script based on this.
I know that’s aiming high but I always been taught aim small, you get small, aim big and you can achieve anything.

Lastly, I’m currently in production, directing a feature called Love and Warheads, which is a military thriller.

We would like to thank Elin and Mark for taking the time to answer our questions. Hopefully you’ve gotten to learn a little about them, and some of the projects they’ve worked on. Be sure to be on the lookout for their upcoming work as well, and don’t miss the “Toy Box Killer” coming soon to our Sunday Scares features! For more information about them, visit their IMDB pages at: