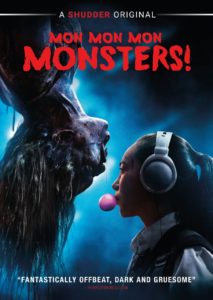 In MON MON MON MONSTERS, a group of classmates doing community service discover two flesh-eating creatures hiding in an old building. One of the creatures is able to escape, but they capture the other one, torturing her while trying to learn what she really is. It soon becomes clear that the first creature’s escape has dire consequences, as she hunts them down and stops at nothing to free her sister.