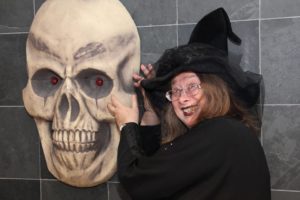 -Janet: My name is Janet Hetherington, and I love horror. I live in Ottawa, Canada. I write stories, screenplays, comics and poetry that embrace the genre in different ways, to different degrees. Lately, I’ve been moving from lighter horror comedy (comics such as ETERNAL ROMANCE, ELVIRA, MISTRESS OF THE DARK, and my spec screenplay INFECTIOUS! OR SQUID-TONGUE SLEEPWALKING MONSTER APOCALYPSE) to darker material (such as my comics story “Crush” in GOTHIC TALES OF HAUNTED LOVE, and my sward-winning spec horror thriller screenplay BLACK GOOSE).

-Janet: I have been consuming horror since I was a kid. I remember watching KING KONG (the original) on TV and my mother scolding me because “the big monkey” was scaring my little sister Debra. I was fascinated with |Ray Harryhausen’s animation. I longed to see the Hammer films advertised on TV but I was too young. I watched TWILIGHT ZONE, THE OUTER LIMITS, LOST IN SPACE, VOYAGE TO THE BOTTOM OF THE SEA. I devoured comics such as DC Comics’ HOUSE OF MYSTERY, HOUSE OF SECRETS and THE WITCHING HOUR, plus superhero and romance titles. I’d often draw my own comics. I created one where CYNTHIA the witch introduces a story called “Swarmed!” about some weird mutant insects invading the planet. I also wrote short horror stories. I was a huge fan of Ray Bradbury and Edgar Allan Poe, and read tons of science fiction and fantasy. I remember writing a story called “The Doll” when I was a teenager about an Annabelle-type haunted toy. It earned good marks in my English class, but unfortunately, I don’t know where that story disappeared to.

-Janet: I knew I wanted to be a writer, but I also knew I had to be able to make money, so I followed in the footsteps of LOIS LANE and studied journalism at Carleton University in Ottawa, Canada. While at Carleton, I got involved with organizing the MAPLECON science fiction and comic book conventions, with top guests from the comics and science fiction and fantasy fields attending . I also discovered Stephen King, and continue to read everything he writes. During university, I began freelance writing for AMAZING HEROES, COMBO, COMIC BOOK COLLECTOR and other magazines about comics. I interviewed Karen Berger, who was editing SWAMP THING for DC Comics, and who went on to edit the ground-breaking Vertigo line. That interview was for a special AMAZING HEROES Women in Comics issue. Did my love and knowledge of horror help me with my interviews? Absolutely. And, I was always drawing, although I began collaborating more and more with my partner, comic book artist Ronn Sutton. In the early 90s, we did the JANNIE WEEZIE daily comic strip together as well as a spider-vampire horror character for MILLENNIUM COMICS called SPINNERETTE. Later, in 1997, when I wrote, drew and self-published my ETERNAL ROMANCE comic book series, featuring a lovelorn vampire named DESTINE, I completely moved from the fan side of the table to the creator side. I wrote about this in THE SECRET LOVES OF GEEK GIRLS. 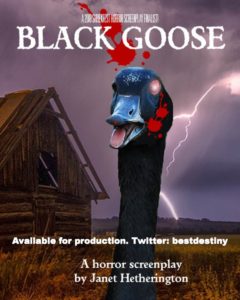 -Janet: My mother always supported my creativity. I don’t think she really understood the comics… she wanted me to write novels! My mother was very happy when I had a short story, “The Power Lunch,” published in BELL, BOOK & BEYOND: AN ANTHOLOGY OF WITCHY TALES. I was in a real book! My sister Debra (the same one who was frightened by KING KONG) and my brother BILL also support my work. My sister and I talk movies, comics and online gaming all the time and my brother comes to premieres of my movies like the film noir thriller, MURDER IN HIGH HEELS.

As for my partner Ronn, he’s a bigger horror fan than I am. He understudied with Bernie Wrightson, and while his current gig is drawing THE MAN-EATER for the Edgar Rice Burroughs’ website, Ronn has illustrated many, many horror comics. Ronn drew ELVIRA, MISTRESS OF THE DARK (Claypool Comics) for 9 years, and I scripted stories for the ELVIRA comic for 6 years. Ronn’s knowledge of horror history is amazing. We go to events like Canada’s Blood in the Snow Film Festival in Ottawa and make a point of seeing films like MANDY and COLOR OUT OF SPACE on the big screen in Ottawa at the Mayfair Theatre. We made trips to Toronto to see Guillermo del Toro’s exhibit AT HOME WITH MONSTERS at the Art Gallery of Ontario and to see IT’S ALIVE! CLASSIC HORROR AND SCI-FI ART FROM THE KIRKHAMMETT COLLECTION at the Royal Ontario Museum. Horror is kind of a way of life for us.

-Janet: Having a Women in Horror Month shines a spotlight on diversity. The sad truth is that when you think about creators — writers, directors, illustrators, publishers, producers — in horror, as with so many other professions, the default is to male, white. And, in the world of horror, women from many backgrounds are creating marvelous macabre material, introducing us to different points of view. Signal boosts about this work, during and beyond Women in Horror Month, is important.

-Janet: One of my role models is Karen Walton, Canadian screenwriter of GINGER SNAPS, a progressive and respected werewolf film. Karen oversees a forum for screenwriters called inkcanada, and share news and tips that can help folks whether they are writing horror or other genres. I’ve also been thinking a lot about Canadian Mary Harron, and her work as a director on AMERICAN PSYCHO. In the U.S. Denise Gossett has been very influential with her annual ShriekFest Horror Film Festival and Screenplay Competition. And Elvira (Cassandra Peterson)! I wrote the Elvira, Mistress of the Dark comic book for 6 years when Claypool Comics held the licence. And let’s not forget that Mary Shelley wrote FRANKENSTEIN, a horror classic. 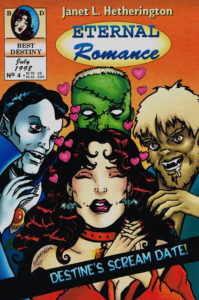 -Janet: If you mean giving credit where credit is due to horror creators who happen to be women has changed, I think we are on the right track.

-Janet: I believe women in horror are going to continue to take ownership of the genre so that we can tell our unique stories. Sometimes it’s easier to get your point across when you frame it as science fiction, fantasy, horror. Also, horror films in particular tend to be low budget ,providing a more viable option for women to write, direct, produce and sell. I want to give a shout-out to Jenny Stang, whose short film THE WHISTLER was shown at film festivals and has been picked up by horror streaming service SHUDDER.

-Janet: I think it’s a matter of seeing women’s names on art, books, screenplays, attached as directors, in leading roles in films (all shapes and sized, ages and origins) to a degree that we can immediately call them to mind. In Canada, I am fortunate that there is a real interest in cultivating new voices and diversity and providing opportunities to women and creators from diverse backgrounds. I submitted my horror thriller feature screenplay BLACK GOOSE to the Netflix/Canadian Film Centre Global Project, Up to four projects will be selected by February 28, 2020, so wish me luck! Wouldn’t that be an amazing wrap to Women in Horror Month? 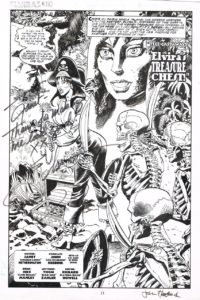 -Janet: Apart from a couple of 15 second horror micro shorts (CRAPPER, KREEPSAKE, EYEBALL BOY) for the 15 Second Horror Film Challenge, I have not really done any directing. The thought of it takes me way out of my comfort zone, but that might be the next important step in my journey. I’ve done a bit of background work in films like HOMICYCLE and GHASTLIES, and I am doing some voice work for WE ARE THE MISSING..

-Janet: My favorite final girl is Laurie Strode in John Carpenter’s horror film HALLOWEEN. Jamie Lee Curtis took that character from a hapless teen who overcomes the odds to a fascinating older lead, in the recent re-imagining. My favorite villain is Annie Wilkes of Stephen King’s novel MISERY. Kathy Bates is amazing in the 1990 film adaptation of MISERY and Lizzy Caplan is providing even more disturbing insight into the character in the TV series CASTLE ROCK. 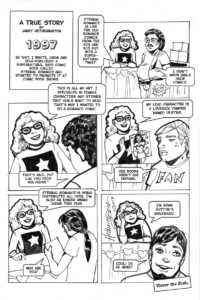 -Janet: Right now, I am working on the screenplay PRISON PLANET for Gray Chance Films, a sci-fi adventure feature with some horror elements. I have also begun work on PARANORMAL NATIVITY, a story about a young woman who fears for her unborn child, a miracle baby due at Christmas, when strange occurrences are captured on her baby monitoring system. ROSEMARY’S BABY meets PARANORMAL ACTIVITY. You can find out more about my work at www.best-destiny.com and IMDb. Thank you!

We would like to thank Janet Hetherington for taking the time to answer our questions, but more importantly for her contribution to horror!