-Chloe: To be honest I didn’t really grow up on Horror, I did used to love “Scream” and “I know what you did Last Summer” movies. But it wasnt until my late 20’s where I really started to love the Horror genre and got more into watching Horror than anything else at the Cinema, especially paranormal and psychological types of Horror films. Some of my favourites are Saw, Stigmata, Exorcism of Emily Rose and The Fourth Kind.

-Chloe: No there wasnt really a specific moment, and the film industry was never something I had every thought about getting involved in at all. It all began with a short film Leroy Kincaide (Director) wanted to create so I started out by helping out with the producing side etc, and then it wasnt until our third short film together that I thought actually I really enjoy Producing, and more so Producing Horror, that I then took the leap to make the career change and go all in and Produce a horror feature film alongside Leroy Kincaide underneath our production company Nocturnal Pictures which also has 4 other movies in development.

-Chloe: I think its bloody epic! Women do not get celebrated enough in this industry let alone horror! I love the fact women get to express their darkside for an entire month, but also it means I can share some of our talented women in our debut horror feature “The Last Rite” which is due to hit the festival circuit Summer/Autumn this year.

-Chloe: I think the future is bright, it can only get better with the way the Horror genre is becoming more and more popular, with so many distribution avenues for your work to be seen, its a win win!

-Chloe: I actually wouldn’t want to do any other role apart from Producing Horror, I love the genre and being on set shooting dark scary scenes …. theres nothing better than seeing a Horror Film you have helped produce come together after years of hard work.

-Chloe: Villain I’d have to say Queen Akasha in Queen of the Damned, final girl probably Sarah in The Descent. Also I just watched “Underwater” and Kristen Stewarts performance was fantastic in that…. but I wont spoil if she is a final girl or not 🙂 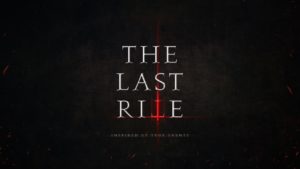 -Chloe: In terms of my projects we are in post production of our debut supernatural horror feature film “The Last Rite” which will hit the festival circuit in Summer 2020.