A HELL OF A TIME …
JACK OSBOURNE AND KATRINA WEIDMAN PLUNGE INTO A NEW SEASON OF PETRIFYING PARANORMAL ACTIVITY WHEN TRAVEL CHANNEL’S
‘PORTALS TO HELL’ RETURNS ON FRIDAY, MARCH 13 AT 9 P.M. ET/PT

“This season is intense,” said Weidman. “Jack and I purposefully explore locations that embody the darker side of the paranormal, as we try to understand why certain places evoke more sinister activity than others. It’s exciting to see what new discoveries we can make in the paranormal field. Yet as we explore the unexplained, we can only presume to know what we’re working with. At the end of the day we really don’t – and that’s the scary part.”

The undaunted duo will face their most fearsome cases yet, as they uncover disturbing tales from bygone pasts and unnerving paranormal activity. Osbourne and Weidman filter through extensive research, utilize advanced scientific equipment and enlist a network of specialists, including psychic mediums, to try and exhume answers behind these terrifying hauntings.

“Katrina and I are breaking down walls – literally,” said Osbourne. “We have unprecedented access to a number of locations and are also the first team to ever investigate some of them for TV. They’re incredibly active sites for the paranormal, and we’re going all in to try and capture substantial evidence.”

In the special two-hour season premiere, Jack Osbourne and Katrina Weidman head to Paulding, Ohio, to investigate the Old Paulding Jail – an almost 150-year-old site rumored to be haunted by the spirits of former inmates, sheriffs and even the victim of a horrific, 60-year-old cold case crime. The pair find it hard to uncover the truth in a sea of rumors, cover-ups and theories of what happened to the young woman who was murdered. They call in a trusted psychic in their search for answers. Determined to find out more, Osbourne and Weidman break down the last remaining sealed jail cell in the basement … and are shocked to discover large bone fragments scattered within. Now, the possibility of not only contacting spirits, but also solving a town’s most infamous murder is on the line. As the investigation deepens, Osbourne has a paranormal experience that will forever change him as an investigator and truth seeker. 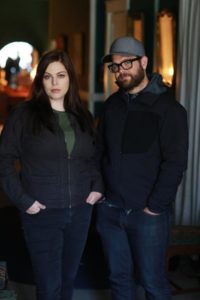 ABOUT JACK OSBOURNE and KATRINA WEIDMAN
Jack Osbourne is the president of Osbourne Media and is best known for MTV’s reality show “The Osbournes,” SyFy’s “Haunted Highway,” and A+E Network’s “Ozzy & Jack’s World Detour.” He has not only starred in multiple series but also developed and produced original unscripted content, including NatGeo’s Wild’s “Alpha Dogs” and “Surviving the Apocalypse,” along with various pilots and development projects for Bravo, CBS, A&E, MTV, WeTV and TRVL. Osbourne appears in and serves as Executive Producer of “Biography: The Nine Lives of Ozzy Osbourne,” which will premiere at this year’s SXSW festival. Osbourne is also an adventurer and paranormal investigator who has documented harrowing face-to-face encounters with the unexplainable in some of America’s darkest and most remote regions. Most recently, he was featured on United Kingdom’s live “Celebrity Haunted Mansion” alongside Jason Hawes (“Ghost Hunters,” “Ghost Nation”) and is currently filming season two of “Portals to Hell.”

Katrina Weidman is a paranormal researcher and investigator, host and producer. She rose to national recognition in her role on A+E’s “Paranormal State,” working on hundreds of cases of unexplained supernatural phenomena and interviewing thousands of witnesses alongside world-renowned paranormal researchers. Weidman also served as co-host and producer of “Paranormal Lockdown” on TLC and Destination America, as well as Chiller’s “Real Fear: The Truth Behind the Movies” (2012) and “The Truth Behind More Movies” (2013). She frequently gives talks and lectures at paranormal conferences and conventions around the world.

ABOUT TRAVEL CHANNEL
For the bold, daring and spontaneous; those adventurers who embrace the thrill of the unexpected; those risk-takers who aren’t afraid of a little mystery; if you’re up for anything, down for whatever, and above all, love great stories, journey on to Travel Channel. We’re more than you expect and everything you didn’t know you were looking for. Reaching more than 79 million U.S. cable homes, Travel Channel is the world’s leading travel media brand. Fans also can visit for more information or interact with other fans through Facebook, Twitter, Pinterest and Instagram. Travel Channel is owned by Discovery, Inc., a global leader in real life entertainment spanning 220 countries and territories, whose portfolio also includes Discovery Channel, HGTV, Food Network, TLC, Investigation Discovery and OWN: Oprah Winfrey Network.

Shriekfest Announces the L.A PREMIERE of STAY OUT STAY ALIVE!