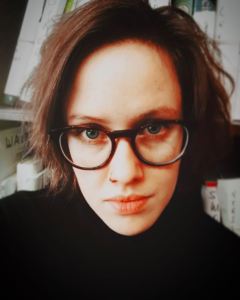 -Kaleigh: I remember loving horror when I was very young. I used to draw my mom pictures of haunted houses when I was still in elementary school. Teachers would ask me why I couldn’t draw her something ‘nice.’ I was like “This is nice.”

Growing up, I was always the ghost-story teller, and I gravitated to the horror section of every video store because those were the films that kept my attention, the films that made me care about what happened.

Maybe the 90s and early 2000s was just a spooky time to grow up. Maybe it was the Canadian East Coast that does something to a person, with its perpetual fog and quiet forests, but I really don’t actually remember a time in my life where I didn’t love all things spooky.

-Kaleigh: I think I fell into contributing to horror by accident. I’m in my thirties, and I’ve had approximately ten thousand jobs, but writing was always a constant in my life.

I still mostly write fiction but after university I found that I was reading more nonfiction than ever, and my writing shifted as well. I realized that I could combine a bunch of things I loved: horror, writing, research, Women’s Studies… zombies. (“Neeeeeerd!” someone yells from the background). But that’s why I started ThisWitchWrites. A place where I can do all of that and, hopefully, start a discussion with other folks who want to share ideas, impressions, and thoughts about the horror films we love, and the female characters in them.

-Kaleigh: I’ve thankfully always had support from my family and friends as a writer, so writing about women in horror films is, I think, just an extension of that. When my writing in fiction occasionally tips over into horror, or the Very Creepy, people tend to like it, so that positive reception has also been really nice.

I do find it hard to find people in my real-life community who like horror as much as I do, or at all. My husband likes musicals and kind of hates horror, so when we find anything at all to watch together it’s basically a miracle.

I think most of the time everyone’s just happy that I don’t force them to watch horror movies with me anymore (unless they’re really, really good). Also, I think the haunted house drawings were probably a pretty good indicator to my parents early on that they’d ended up with a weird one.

-Kaleigh: I love that Women in Horror month exists. I think many people are totally unaware of how many talented women actually are in horror, and WiHM helps shine a light on the huge amount of talented women here. Having WiHM is a way to show the horror community (as well as other folks) that women are, in fact, a huge part of what makes horror tick. We’re the beating heart beneath the floorboards, so to speak. I guess we make some people uncomfortable just by being here. Horror has always been a political commentary, it gets under our skin, it challenges us, it makes us think. And in the only filmic genre where women onscreen get just as many lines as men, I think it’s the perfect place to have real women’s voices heard in real life as well.

-Kaleigh: I think women in horror are already getting recognition, thanks to things like Women in Horror month, but I don’t know if it’s the “recognition they deserve” (which I take to mean widespread or equal recognition).

I would love to say that the reason women in horror don’t get the recognition they deserve is because horror, as a genre, still exists on the margins, and that it’s actually a lot of people in horror who don’t get recognition — whether it’s on film or literature or academia or art. But I also know that generally, systemically, women get less opportunities and less recognition than they should in all genres, and in many different fields and aspects of life.

I think there’s still a lot of work to be done, and I don’t know how long it’s going to take. Sometimes it seems impossible, but I know it’s not. I like to think that horror will be a major contributor to giving women equal rights and opportunities both in and out of the genre, and I would so love for the people outside of horror to feel like the horror genre just came totally out of left field to do it. Imagine: ‘Hollywood Saved by Horror’. That’s a headline I’d like to see.

-Kaleigh: Honestly, I would love to be the spooky thing in a horror movie.

-Kaleigh: My favourite villain is Sissy Spacek’s Carrie White. Is she a villain? I’m not sure, but I do love her SO MUCH. I specifically chose my prom dress to be like Carrie’s prom dress, and it was probably the only traditional thing I actually liked about my prom.

And final girl? But how can I choose just o— Brigitte. It’s Brigitte Fitzgerald from the first Ginger Snaps film. 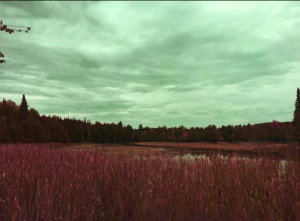 -Kaleigh: ThisWitchWrites exists on Substack (https://thiswitchwrites.substack.com/) and Medium (https://medium.com/@thiswitchwrites/) where I write about female characters in horror films. Coming soon(ish) I’ll be writing about Needy and Jennifer’s relationship in Jennifer’s Body, and about what’s up on with Ghost in Ginger Snaps: Unleashed.

More about Kaleigh in her Bio:

Kaleigh Fleming is a writer from the windy wilds of the East Coast of Canada. She has an overpriced, but never useless BA in English Lit., and is currently doing the equivalent of an MA alone, with all of the research and none of the credit or tuition fees. She currently lives in Ontario with her husband, their three cats, and a slowly growing forest of potted plants.
Thanks for this really awesome opportunity, PromoteHorror.com, you’re doing great things. And Happy #WiHM everyone! (Let’s celebrate women in horror every month).

We would like to thank Kaleigh Fleming for taking the time to answer our questions, but more importantly for her contribution to horror!

‘Twice Upon an Apocalypse’ Coming May 30th!