17 March has been confirmed as the North American release date for the multi-award winning “Nefarious”, directed by Richard Rowntree.

The film will be released on VOD, DVD and Blu Ray, and is now available for pre-order on iTunes via the link below:

Gravitas Ventures, a Red Arrow Studios company, will also release the film on Amazon Prime Video, Vudu & GooglePlay in VOD format, and via Amazon and other retailers on Blu Ray and DVD.

For those who prefer physical media, pre-orders for the Blu Ray are currently available via Target at:

The independent British film received high praise and multiple awards & nominations at festivals in both the US and the UK. With a heavy emphasis on social commentary, particularly relating to economic disparity in the western world, the film features award winning practical effects and a clever script. 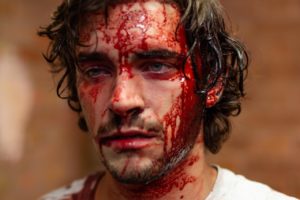 Nightmarish Conjurings called the film “a seat gripping journey of twists and blood filled turns”, whilst Horror Fuel said it had “a ton of entertainment value”. Ready, Steady, Cut described is as “a nasty little film, just as intended” and “a brutal little success”. It also made Modern Horrors’ list of “20 Indie Horror flicks to watch in 2020” alongside Elijah Wood’s “Come to Daddy” and Richard Stanley’s “Colour out of Space”. It will also be screened at the prestigious Starburst International Film Festival in Manchester a few days before release.

Gravitas Ventures, a Red Arrow Studios company, is a leading all rights distributor of independent feature films and documentaries. Founded in 2006, Gravitas connects independent filmmakers and producers with distribution opportunities across the globe. Working with talented directors and producers,Gravitas Ventures has distributed thousands of films into over a hundred million homes in North America – over one billion homes worldwide. Recent releases include Armstrong, directed by David Fairhead; Above the Shadows starring Olivia Thirlby, Megan Fox and Jim Gaffigan; The River and the Wall, directed by Ben Masters; Score: A Film Music Documentary; California Typewriter; Legion of Brothers; Katie Holmes’ feature directorial debut; All We Had, Colin Hanks’ All Things Must Pass; and Being Evel from Academy Award winning director Daniel Junge and producer Johnny Knoxville.

The group’s significant output includes scripted, non-scripted and formatted content and IP, from TV and film to short-form and branded content, made for anarray of global networks and platforms.