As you may know, February is “Women in Horror” month. To celebrate, PromoteHorror.com asked women from different professions if they would like to answer some questions about being a “Woman in Horror.” One of the women, who was kind enough to answer our questions, was the terrific first-time actress, Heather Stone, who co-stars in “The Killer of Grassy Ridge” – an all-new horror short now streaming on YouTube and currently touring the festival circuit. Lets see what she said about being a “Woman in Horror”… 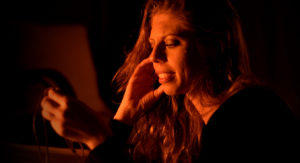 -Heather: Probably in 1990 when Stephen King’s “It” first aired on TV. I was a kid, and the first half completely terrified me. The second half not so much (taking the most frightening character I’d ever seen and turning him into an alien spider was somewhat silly, but it made me laugh and I could sleep much easier). I still can’t look at clowns in the same way.

-Heather: I am brand new to acting, so I’m not sure how much I can say I’ve contributed to horror. I never actually had that moment where I went from being a fan to a contributor. I initially didn’t want to accept my role in “Killer…” because I had zero acting experience, and I’m not always comfortable having my picture taken, let alone being filmed. But John, the director, was driven, persistent, supportive and encouraging in the best possible ways. I did like the story, the character, and the vision for the whole project. I didn’t meet the other actor, Mike Stumbo, until our day filming together. Fortunately, we hit it off immediately and were able to work off each other and convey that chemistry on set. The rest of the crew made me feel comfortable and confident. Because of them I had an absolute blast and am looking forward to future projects.

-Heather: I definitely had some explaining to do after accepting this role! My friends have always been supportive of everything and I’m grateful to them every single day. I’m also beyond lucky and grateful to have an amazing mother… however it took a bit of explaining when I told her I was going to co-star in a film called “The Killer of Grassy Ridge.” In the end she did shift her views a bit and became supportive, however she hasn’t seen the film (and likely won’t) – but that’s ok! In a weird way I take it as a compliment that the film sounded so creepy that even my own mother won’t watch it! 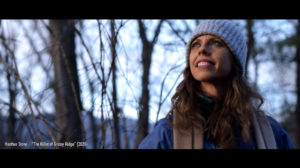 -Heather: I absolutely love the idea of it. The acknowledgment of women in horror is important. The genre wouldn’t exist without the onscreen “scream queens,” heroines, and female villains. I think my favorite aspect is that now more female directors, producers, and writers are heading up these kinds of projects, not just in horror but in all genres.

I have enjoyed seeing the horror genre evolve particularly when it comes to women. For the longest time, most female roles in horror were very predictable – if they weren’t innocent virgins they were going to die. It’s great to see how those stereotypes have changed over the years.

-Heather: Definitely Sigourney Weaver as Ripley in Alien because she was intelligent and a badass. As far as slasher-flicks go, Jamie Lee Curtis. I don’t remember how old I was when I saw the original Halloween, but I loved the character of Laurie Strode. She fought against Michael Myers, saved two kids, and lived. Before her, I hadn’t really seen strong roles like that for women – especially in horror. I was beyond excited to see her back again in 2018 in the latest Halloween movie. One of my favorite scenes in that movie was when the perspective flipped to Michael Myers’ realization that Jamie Lee Curtis was actually hunting him.

-Heather: Everything! Female characters as intelligent, brave heroines, to the most villainous and evil roles. I also have such huge respect for the “scream queens” – they make you laugh and make you feel fear and sympathy – sometimes all at once. The default female role no longer has to be the “damsel in distress” or the brainless victim. Behind the scenes I think it’s just a matter of time before we see the female equivalent of Wes Craven or John Carpenter or someone of that caliber who’s a “house-hold” name and synonymous with horror. 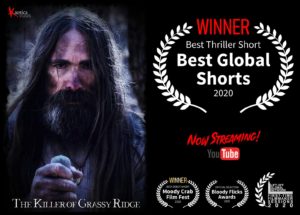 -Heather: As long as it takes!!

-Heather: Favorite final girl is definitely Laurie Strode for all the reasons mentioned above. Favorite female villain is from Misery – Kathy Bates as Annie Wilkes – absolutely a standout and a seriously disturbing performance; she still creeps me out to this day.

-Heather: “The Killer of Grassy Ridge” premiered earlier this month and is now streaming on YouTube. It’s doing great on the festival circuit and has already won awards for Best Thriller and Best Debut Short. It was a great experience and I hope everyone checks it out! Thank you so much for the interview!

We would like to thank Heather Stone for taking the time to answer our questions, but more importantly for her contribution to horror!