And it’s the BEST THING that’s ever happened to her! 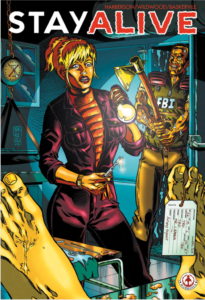 Hollywood starlet Jane Morgan revives her fading career by provoking a group of serial killers and then starring in Stay Alive, a reality TV show about surviving the killers’ attempts to murder her. 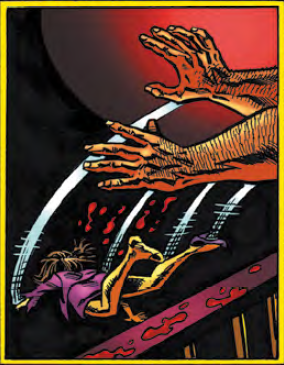 HORRORBUZZ says it’s “Ridiculous In All The Right Ways” and rates it “9 out of 10 Plague Doctor Masks[!]”

SCARETISSUE raves: “I REALLY enjoyed this. It’s graphic, it’s bloody, it’s silly and it’s got a super compelling story. I found myself several times thinking about how cool this story would be were it ever translated to the big screen. It would be tremendous.”

“Harberson pens a perfectly tasteless tale of sordid misadventure and depraved delight in Stay Alive, his first graphic novel showcasing a deep well of pop culture knowledge and intuition for psychopathy and excess, with echoes of Bret Easton Ellis. Early critical acclaim for originality and storytelling from HorrorBuzz. Artwork by Stephen Baskerville with excellent production quality. Cult fans will not be disappointed!”

“An unfiltered, insane, and wild masterpiece from the brilliant mind of Jim Harberson. Well illustrated and written, I couldn’t put it down. It is a no holds barred, psychotic thriller that’s perfect whether you just love sex and violence (endless sex and violence!) or prefer to look deeper for a spot on commentary on today’s popular culture taken to the limit. I highly recommend this for anyone who isn’t squeamish or easily offended. NSFW is an understatement. You’ve been warned. Now enjoy.”

“It’s got comedy, action, bloodshed and a surprising amount of relevant social commentary. There’s no better use of your time than reading this!”

“This is an excellent creation. The storyline contains all that you look for in a horror/comedy type of comic…very imaginative and quite graphic. Well composed and arranged storyline keeping your attention with each page. . Easy on your eyes as the graphics are bright and bold. I really enjoyed the heft to this comic- literally and figuratively!”

This graphic novel has it all!

Start reading today by getting your copy at: