My literary Sci-Fi / Horror Fiction titled WICKED AWAKE has approximately 120,000 words. I applied a great amount of detail, science and research in my tale. I believe it will hold your interest with a brisk paced, clever story line that I would compare to Max Brooks’ “World War Z” crossed with Michael Crichton’s “The Andromeda Strain” (but with humor). WICKED AWAKE is horrifying at times yet very funny in places. 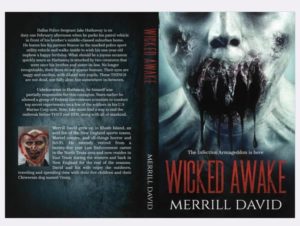 In my novel, WICKED AWAKE, Dallas Police Sergeant Jake Hathaway is on duty one February afternoon when he parks his patrol vehicle in front of his brother’s middle-classed house. He leaves his K9 partner Roscoe in the marked police sport utility vehicle and walks inside to wish his one year old nephew a happy birthday. What should be a joyous occasion quickly sours as Hathaway is attacked by two creatures that were once his brother and sister-in-law. No longer recognizable, their faces do not appear human. Their eyes are saggy and swollen, with dilated tiny pupils. These THINGS are not dead, nor fully alive, but somewhere in-between. This would be just the beginning of an “Infection Armageddon.”

But Unbeknownst to Hathaway, he himself was partially responsible for this contagion. Years earlier he allowed a group of Federal Government scientists to conduct top secret experiments on a few of the soldiers in his U.S Marine Corp unit. Now, Jake must find a way to end the outbreak before THEY end HIM, along with all of humanity.

I grew up in Rhode Island, U.S. and I’m an avid fan of the New England sports teams, Marvel comics, and all-things horror. I recently retired from a twenty-five year Law Enforcement career in the North Texas area and now reside in East Texas during the winters and back in New England for the rest of the seasons. My wife and I enjoy the outdoors, traveling and spending time with our five children and our Chiweenie dog named Vinny.

I envision my book being popular with horror fans, as well as those who like military and police stories. Anyone who likes to read action stories and dig humor will enjoy, as well. As for my marketing strategy, I am currently using the following social media outlets to advertise the book.