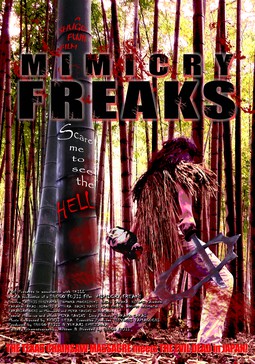 Shugo Fujii’s Mutation Fueled J-Horror will be Streaming Worldwide, Except in Asia

The film follows Fuma, a man that wakes up in a bed in the middle of a forest with his only son Ren, when suddenly a traditional Japanese monster, known as Namahage, attacks them. Not far from there, a wedding planner takes a young couple to a venue deep in the woods. When the two stories come together, the unpredictable happens.

Inspired by a famous Japanese drawing (Kaidan Chibusa no Enoki) by Seiu Ito about abuse of minors, “Mimicry Freaks” disdains J-horror and focuses on the American codes of the genre. A cross between “Chainsaw Massacre” and “Evil Dead”, with a mix of mutations, massacres sponsored by everything you can find in the garden shed, blood that gushes through the air etcetera.

After its streaming premiere on Spamflix on April 2nd, a theatrical run will start in Japan on April 24th in more than 10 cinemas.

Launched at the end of 2018, Spamflix was born with the aim to offer a platform with a precise editorial line of cult and avanguarde films, that makes available films to cinephile and film enthusiasts, that rarely are to be seen outside of the film festival circuit or its country of origin.