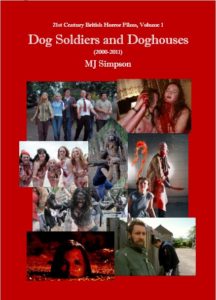 28 Days Later, Shaun of the Dead, The Descent, Eden Lake, Kill List – the tentpole titles of 21st century UK horror cinema are well known. But beyond those hits is a massive body of limited release and DTV titles which have received little attention from critics. Successful, independent movies such as Outpost, Freak Out, A Day of Violence, A Lonely Place to Die, Exam and Exhibit A constitute the bulk of the British horror film industry.

And beyond those is a further layer of ultra-obscurities, sold directly through Facebook, or available online via now-defunct VOD websites, or simply posted straight onto YouTube. Who has even heard of, let alone seen, the likes of Call Me a Psycho, Creep Killers, The Rise of Jengo or The Hell Experiment?

MJ Simpson, doyen of British horror film writers, has seen them. The good, the bad and the extraordinary. For 20 years he has been scouring the web for these films and reviewing them on his blog British Horror Revival and in his previous book Urban Terrors.

Between January 2000 and December 2019, an incredible one thousand feature-length horror films were produced and released in the UK. Dog Soldiers and Doghouses is the first in a unique series of books cataloguing this amazingly prolific and largely undocumented corner of cinema.

Covering a 12-year period from 2000 to 2011, this book reviews 316 British horror movies. Cast and crew details, critical analysis, production history and release data are all wrapped up in an entertaining and informative half-page review, accompanied by a colour image.

From big screen blockbusters to backyard obscurities, from cinema screens to YouTube, with budgets ranging from £20 million to 45 quid (or less…), British horror cinema has never been so diverse. This book and its forthcoming companions are a guide to the true, hidden ‘British film industry’ which remains almost entirely ignored by the mainstream film press.

MJ Simpson is, apparently, the world’s foremost authority on 21st century British horror films and these books are the culmination of two decades of passionate research. Mike is the author of Urban Terrors: New British Horror Cinema 1997-2008 (Hemlock Books, 2012), which covers about a third of these films in more detail and context. He also wrote a couple of books about Douglas Adams.

He works by day in the Communications Office at the University of Leicester and sang the 1980s classic ‘Africa’ on what many people consider to be the worst TV show ever made.

21st Century British Horror Films, Volume 1: Dog Soldiers and Doghouses is a limited edition publication available exclusively online at https://mjsimpson.bigcartel.com for £20 plus postage. It is 176 pages, A4, softback, and full colour throughout, with a foreword by horror expert Dr Johnny Walker.

“MJ Simpson is the unsung Indiana Jones of the British indie horror scene. Heroically determined to track down every UK indie horror production in his quest to unearth the gems other reviewers would often never dig deep enough to discover. And like any true hero he’s happy to share the treasure with you.” Jake West (Evil Aliens, Doghouse)

“MJ Simpson is the one reviewer that means something to independent film makers. Always fair, he critiques both the good and bad. This book is a must read for all film fans.” Stuart Brennan (The Lost, Plan Z)

“MJ Simpson affords as much time, attention and respect to the work of the film maker with the ketchup bottle in their hand as he does the one clutching an Academy Award.” Dan Palmer (Freak Out, Stalled)

“An incredible attention to detail and an unbeatable amount of knowledge. The only people who know more about British horror movies than MJ Simpson are the people who actually made the movies, and half the time MJ’s got a better memory.” Pat Higgins (HellBride, The Devil’s Music)

“I was told my film Kill Keith was ‘worse than being poked in the eye with a frozen dog turd’, but not by MJ. He knows his shit!” Andy Thompson (Kill Keith, The Scar Crow)