The satanic panic was a moral outcry in the United States over supposed “satanic” influence in media warping the youth of America. Claims that playing an elf in Dungeons and Dragons could lead to demonic possession, that playing heavy metal music backwards would reveal satanic messages, and that therapists could uncover repressed memories of satanic ritual abuse, were all too common. Volumes and volumes of material were produced on this fake subject. These texts leads to What Hell May Come which takes a look at what the world would actually be like if all of the claims of the satanic panic were true.

Set in 1986, Jon St. Fond’s life is a living Hell. Deliberately abused and neglected by his parents, the only joy he has in life is an escape into a fantasy land of role playing games. He discovers that his parents are part of a secret occult religion with hidden ties all across the world. Jon soon learns there is method behind the madness of his life, as his Father begins to bring him closer and closer into the ways of the cult. Ultimately, Jon must make a choice between all the pleasures of the earth and the future of his soul. 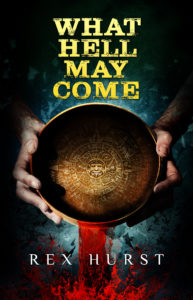 Author Bio: Born into the blue-collar city of Buffalo, NY, Rex Hurst was traumatized as a small child by the suffocating rabbits scene in the animated adaptation of Watership Down. Ever since, his mind twists toward the macabre, until his inevitable blossoming as a horror writer. When not writing he is an assistant professor of composition, public speaking, and literature.

Rex Hurst is the author of The Foot Doctor Letters: A Serial Killer Speaks Out as well as several science fiction books and novellas. He is also co-host of the weekly radio show Write On SC – Yes, radio shows and stations still do exist- on the art of writing. Back episodes can be found on his website at Rexhurst.com.

An “Unwelcome Visitor” Comes to The Tribe and to VOD this February 10th!