One of the year’s most supernaturally funny films…destined to become a classic of the horror comedy genre. 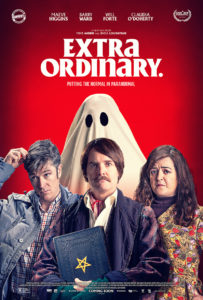 Rose, a sweet, lonely driving instructor in rural Ireland, is gifted with supernatural abilities. Rose has a love/hate relationship with her ‘talents’ & tries to ignore the constant spirit related requests from locals -to exorcise possessed rubbish bins or haunted gravel. But! Christian Winter, a washed up, one-hit-wonder rock star, has made a pact with the devil for a return to greatness! He puts a spell on a local teenager — making her levitate. Her terrified father, Martin Martin, asks Rose to help save his daughter. Rose has to overcome the fear of her supernatural gift & work with Martin to save the girl, get the guy, and be home in time for a light snack…maybe a yogurt or something.

“”Extra Ordinary” is an extraordinarily funny tale about ghostbusting, lonely hearts and moving on. It’ll possess you.” –Detroit News

“For all the Blood Moon horror movie hijinks and unwelcome visitors from the beyond and from hell, Extra Ordinary is at heart a warm and inviting Comfort Food Movie.” –Chicago Sun-Times