CURLY G is a chip off the ol’ Nyuk, Nyuk, Nyuk
featured in Exorcism at 60,000 Feet
Coming out May 5th from Scream Factory 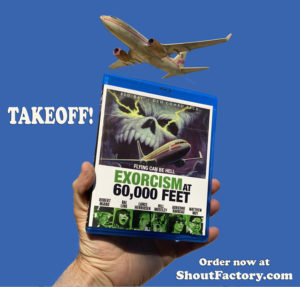 Bradley Server (aka Curly G) the grandson of Curly Howard of The Three Stooges, has heard his calling and is co-starring in the Girls and Corpses Presents film of Exorcism at 60,000 Feet being released May 5th from Shout/ScreamFactory in which Server plays a deaf and mute passenger who must survive a series of Satanic possessions on the doomed aircraft. Also, starring in the film are: Lance Henriksen, Adrienne Barbeau. Bai Ling. Matthew Moy, Robert Miano, Kevin J, O’Connor, Kelli Maroney and Robert Rhine.

Producer, writer Robert Rhine explains, “I first cast Curly G (aka Brad Server) in Cynthia (Lionsgate/Indican) in his first film role. Curly recalls, “I was a postal carrier had to deliver a package but I get buzzed by a low flying drone and I do a flip on the front lawn of a house. The director had me do like fifty takes, I think for their own amusement. But I loved working on the film and wanted to do more.”

Producer Rhine continues, “After Cynthia I started writing the script for Exorcism at 60,000 Feet (with my writing partner Daniel Benton) and immediately thought of the role of the deaf mute for Curly G.”

Curly G adds, “I got a text from Robert Rhine 6 months after filming Cynthia saying, “I have another acting gig for you if you’re interested on another role in a Girls & Corpses feature.” Curly adds, “Well once Robert told me my character, I was certainly not saying anything except yes to the part. You see I was cast as the deaf mute in Corpsys new feature Exorcism at 60,000 Feet… I remember after reading the script (my 1st ) I thought man Corpsy may be more twisted then me. Then I thought about in again and was sure of it. All I can say is Wow. This is one crazy film and what a blast it was being part of. I met so many great talented people. Plus most of the same crew from Cynthia so I felt very much at home. To this day I ask Robert If I will ever get a speaking role in one of his films. His response usually is “Don’t count on it!” Man I love this guy!!! 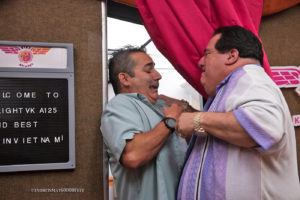 Curly G explains how he found out he was Curly’s grandson when he was 12, “One day, when my brother was twelve he was in the car driving home from seeing the play Fiddler on the Roof, and he was so inspired he declared he wanted to be an actor. My grandmother casually said, “Oh, your real grandfather (as she had re-married) was an actor.” My brother was stunned and said, “Really who?” She replied, “Oh, Curly from The Three Stooges.”

Next up, Curly G has a role in the Girls and Corpses Production of Escape From Area 51. Due for release winter of 2020.

Exorcism at 60,000 Feet with an all star iconic cast is now on Blu-Ray/DVD combo and will be released on digital to OnDemand, ITunes, Amazon, Vudu, Fandango, Comcast, Spectrum, Googleplay and others on May 5th!

G&C: You are Curly’s actual, legitimate, grandson. Curly Howard of The Three Stooges was always my favorite stooge. Did you ever get to meet your iconic grandpa?

CG: Unfortunately Curly was taken from us far too young in 1952, and I was born in 1965. Although we never met, the Howard bloodline is running through my veins, shaping my life, and I couldn’t be more proud to carry the honor of being Curly’s youngest grandson. My mother is Curly Howard’s first daughter. I also know that I was difficult at birth. Not that my head was big, but that the doctor both slapped me and my mom. Slapping runs in the family.

G&C: I understand that you weren’t told you were Curly’s grandson until your mother casually mentioned it when you were in grade school. How old were you and how did she tell you? What effect did this have on your life?

CG: One day, when my brother was twelve he was in the car driving home from seeing the play Fiddler on the Roof, and he was so inspired he declared he wanted to be an actor. My grandmother casually said, “Oh, your real grandfather (as she had re-married) was an actor.” My brother was stunned and said, “Really who?” She replied, “Oh, Curly from The Three Stooges.”

G&C: Wow, she was hiding a heck of a secret!

CG: And it stayed a secret because we were told not to share this information with anyone. My brother was in shock. Once home he rushed upstairs to tell me the news, and I just stared at him in disbelief. You see up to this time I was seven, and we only knew of Curly as our hero, a TV star. Our mission was to get home from school to watch the Stooges just like every other kid. But now things were going to be different. Curly was now family. It’s kind of a hard thing to grasp and certainly not something your schoolmates are going to believe the next day on the playground. Then, we were told not to talk about it, in front of our existing grandfather. We were told it would hurt his feelings. He was a wonderful and sweet man. The justification was that he could never fill the shoes of or be Curly. Or, so that’s what we were told. In the coming days, and years, the subject of Curly was not mentioned nor talked about. Not in casual conversation and certainly not at the dinner table.

G&C: Do you ever find yourself channeling Curly? Are you a chip off the old blockhead?

CG: In the 80s I was already showing signs of early Curlyism. I was the class clown, the one you wanted at all the parties. I was crazy and quick-witted and wanted all the attention. Stooge family litigations were keeping me at bay and more reasons to restrain my inner stooge from coming out of the closet.

G&C: Tell us something no one knows about your grandfather? Was he a ladies man? Drug fiend? Spy during the war? Didn’t he shoot himself in the foot, literally?

CG: Well Curly was quite the ladies man. I would love to think he was faithful to my grandmother while on the road but… hmm? I don’t think so! He loved to drink, smoke cigars and be surrounded by beautiful women. Sort of like you, Corpsy. I’m not aware of any drug problems. But I would certainly hope he had a large supply of painkillers. I mean for God’s sake if anyone deserved a prescription it would have been Curly. I picture him walking into a pharmacy and people just offering him pills. A spy during the war? Maybe in an unreleased short film, but not that I’m aware of. Yes, he did have an accident as a teen with a rifle on their farm and did shoot himself in the foot. If you notice when he does his infamous circling around in place skit, his one leg is planted while he hobbles around. This was due to that gun accident.

CG: Well, first let me start by saying the writing and the producing were excellent. From the moment I walked up to the set and saw the complexity and all that’s involved in shooting a movie, I was very impressed. The nicest lady that was head-of-wardrobe was asked, “Do you like the Three Stooges,” her response was, “No I don’t care for them at all.” My friend said, “Oh, well the guy you’re dressing is his grandson.” Gulp.

G&C How did shooting your scene go?

CG: It was as if I had been doing this forever. I felt so comfortable in front of the cameras with all the crew and cast looking on. They called me Curly G which also made me feel empowered. My role, a delivery driver who delivers a vital package and has to perform a flip on the front lawn. Although I didn’t practice this stunt I was certain I could pull it off a few times in front of the camera. Well come to find out, nothing in Hollywood is just shot a few times and if it is, it’s from at least three to four angles. After about two hours and twenty-five flips later, my body held together by the sheer fact that my grandfather spent his whole career doing his own stunts. I was asked several times, “Curly G, you’re doing great, how are you feeling?” Of course, I responded, “I’m doing great.” I believe it was at about forty flips I started to lose feeling in my lower body but had to press on. I did what may not be kosher in Hollywood, and grabbed the director with two hands and said, “This scene will be in the movie right?” With a couple shots still left, Mr. Corpsy came over to me and said, “Do it this time like Curly.” I then did the scene with some Curly faces. He quickly returned and said, “Let’s just stick to the regular way. You looked as though you just had a stroke.” Later after the shoot was completed I hobbled to my car, waved goodbye, and said to myself, “I love this shit.”